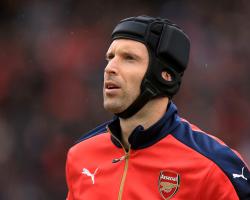 Arsenal's solitary signing has been goalkeeper Petr Cech from Chelsea for ÃÂ£10million, making them the only club from a major European league not to recruit an outfield player this summer.

The Arsenal Supporters' Trust believes the club has missed a good opportunity to strengthen their challenge for the Barclays Premier League title.

"Arsenal are in a very strong financial position and it is of course disappointing that the transfer window has closed with just the signing of Petr Cech," it statement read.

"Arsenal have built a strong squad and just one or two more good additions would have strengthened the chances of winning a first title in 11 years.

"No one wants Arsenal to buy players just for the sake of it, but we do want to see the money being invested to make the club stronger."

The Tottenham Hotspur Supporters' Trust is angry that Spurs missed out on West Brom striker Saido Berahino despite repeated bids, leaving the club with Harry Kane as their only available forward.

"We think a credible explanation from the board to address the genuine concerns of supporters, many of whom have backed the current board consistently, is now required," it said in a statement.

"We welcome the good signings that have been made, but are concerned at the gaps that still exist and the pressure this places on the manager and the team."