Arsenal captain Per Mertesacker staying with Gunners for one more year 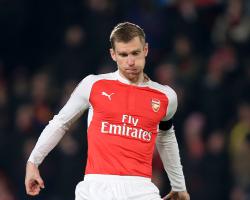 The 32-year-old defender has yet to play for the Gunners this season after suffering a serious knee injury in a July friendly against Lens, and his deal was due to expire at the end of the campaign.

But despite the centre-back having required knee surgery, Wenger opted to take up an option the club had to keep the World Cup winner for another 12 months.

"He has an option that we have taken," Wenger said.

"There was no negotiation, there was just an option that we took up

He is back in training, not with the squad but I think he is a few weeks away."

Mertesacker replaced Mikel Arteta as the club's skipper after the Spaniard retired at the end of last season and took up a coaching role at Manchester City.

Arteta was sidelined with a number of injuries for much of his spell with the armband, but Wenger insists the same fate will not befall his current captain.

"It's completely accidental," he said of the German's knee problem.

"With Arteta, it's true that he struggled with muscular problems, but Per was accidental.

"It was a knee problem but he has recovered from that, so there's no reason why he should be injured again."

His German compatriot Shkodran Mustafi, a big-money summer signing from Valencia, has built a strong understanding with vice-captain Laurent Koscielny at the heart of Wenger's defence.