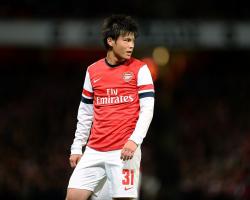 Japan international Miyaichi joined the Gunners in January 2011 but made only a handful of first-team appearances, spending loan spells at Feyenoord, Bolton, Wigan and FC Twente

Ajayi, meanwhile, signs for the Bluebirds following a loan at the end of last season, having moved to Arsenal from Charlton's academy in 2013

The club said in a statement on their website: "Everyone at Arsenal would like to thank both Ryo and Semi for their contributions to the club, and wish them well for their future careers."

Arsenal are expected to add to the squad during the summer, so more departures seem inevitable.

Forwards Lukas Podolski and Joel Campbell have been linked with moves away from the Emirates Stadium, as has goalkeeper David Ospina should veteran Petr Cech arrive from Chelsea.

One young player, though, looking to make a major impact at the club next season is Gedion Zelalem.

The Ethiopia-born midfielder impressed with the United States at the Under-20 World Cup in New Zealand and now intends to force his way into the plans of Gunners boss Arsene Wenger, having made his senior debut in the Champions League tie away to Galatasaray last season.

"I am going to go back for pre-season and try to get into the first team and play some games," Zelalem, 18, said in an interview with the official FIFA website following America's quarter-final exit to Serbia after a penalty shoot-out in Auckland

"If I can do that, great

If not, I will look to get out on loan somewhere

"It is a dream come true to be at a club like Arsenal and I want to get into the first team this season, play minutes and start matches

"I have high expectations of myself and if I was to be starting week in, week out, I wouldn't be surprised."