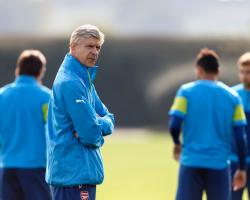 That moved Arsenal up to fifth in the table, nine points adrift of leaders Chelsea, and they could break into the top four if they see off bottom club Burnley and West Ham United slip up at Stoke City.

Wenger's side have struggled for consistency this season, but will be strengthened by the return of midfielder Jack Wilshere after suspension.

The England midfielder has shown signs he is returning to his best form after a succession of injuries and he will be joined by Theo Walcott, who was an unused substitute at Sunderland after a 10-month absence with a knee injury.

Wenger knows his side can ill-afford to lose any more ground on Chelsea, but Robert Pires, the former Arsenal midfielder, believes his old club can still be crowned champions if they strengthen their midfield.

"I hope we can still win the title," Pires told Sky Sports

"Of course it is going to be very difficult, but the season is very long and the Christmas period coming up will be a very important one for Arsenal.

The Frenchman added: "I think Arsene Wenger has a very good team at Arsenal, but I do think they need one player in midfield in the mould of Patrick Vieira.

"They need a tall player, a strong player, because in England you need players who are physical

That position is very important and I think that is the only missing piece."

German playmaker Ozil is a long-term absentee with a knee problem and is joined on the sidelines by the French trio of Olivier Giroud, Mathieu Debuchy and Laurent Koscielny.

Wenger has revealed that left-back Kieran Gibbs is also a doubt for this weekend.

"It is a hip problem," he said

"He came off at Sunderland with 20 minutes to go

He is a doubt, but we'll know more tomorrow (Friday)."

Burnley are yet to win a match from nine attempts so far this season, but their manager, Sean Dyche, insists his players' sprits are not broken.

"It dents you, but it doesn't break you," said Dyche, whose side are the only team in the top four English divisions yet to win a match

Whether it hurts or not is irrelevant.

"It gives you the added motivation to get wins

It's important we focus on what we're about

We get the players prepared to go and achieve things."

Burnley will welcome Dean Marney back into the squad to face Arsenal after the former Tottenham Hotspur midfielder recovered from a hamstring strain.