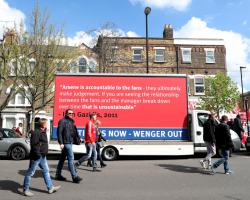 Wenger has increasingly split the Gunners fan-base in recent weeks, with six defeats in nine games having left the north London club out of the Champions League and sixth in the Premier League ahead of City's visit.

The Frenchman's contract expires in the summer and he is yet to announce whether he will sign a new deal or leave the club he has managed for over 20 years.

Two protest marches took place ahead of recent home games, while a plane was flown over the Hawthorns calling for Wenger to leave, although that message was offset by a pro-Wenger banner also taking to the skies as West Brom beat Arsenal 3-1.

Almost ÃÂ£4,000 has been raised through a crowdfunding campaign, with some of the funds used to decorate a van with quotes from Wenger and Arsenal chief executive Ivan Gazidis.

The Gazidis quote plastered to the side of the van read: "Arsene is accountable to the fans - they ultimately make judgement

If you are seeing the relationship between the fans and the manager break down over time, that is unsustainable."

A message underneath read: "That time is now, Wenger out."

A number of other banners were unfurled as supporters made their way to the stadium, with leaflets also handed to supporters.

The leaflet contained a seven-point plan those protesting hope will "help spread the word" over their grievances.

A link to an online petition was included in the seven points, along with calls to donate to the crowdfunding, and encouragement to send tweets to the official Arsenal account as well as that of their main sponsors.

Earlier in the week, a prominent Arsenal supporters' club called for Wenger to leave as the majority of their members believe he is no longer the right man for the job.

The 1,000 members of the Arsenal Supporters' Trust (AST) were sent a survey which included the question: "Do you support Arsene Wenger signing a new contract and remaining as Arsenal manager?" Only 15 per cent said "yes", with 78 per cent of respondents saying "no".

The handling of Wenger's contract situation drew even more negative replies, with 86 per cent responding "no" when asked: "Do you think the way that the Arsenal board have dealt with Arsene Wenger's contract is in the best interests of Arsenal Football Club?"