Arsenal incentive for PNE or United 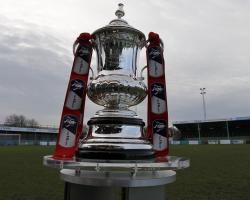 They gave both sides on show a mouth-watering pre-match incentive, a chance to depose Arsene Wenger's Gunners whose Wembley success over Hull last May was their first silverware in nine years.

Liverpool's hopes of reaching Wembley on the occasion of the departing Steven Gerrard's 35th birthday were also boosted as they were drawn to face Sky Bet Championship side Blackburn at Anfield.

Giant-killers Bradford, fresh from ousting top-flight opponents Sunderland and Chelsea, avoided Premier League opponents this time and will instead take on second-tier Reading at Valley Parade.

That pairing ensures at least one Football League side will make it to the final four of the competition.

The remaining quarter-final pitted midlands neighbours Aston Villa and West Brom against each other, with Villa at home.

There will be no repeat of the controversy surrounding the decision not to show Bradford's defeat of Sunderland on television, with all four games being broadcast live by BBC or BT Sport.

All ties will be played on March 7 or 8.