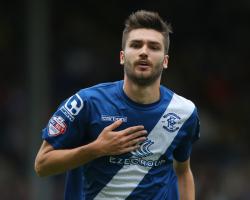 Chuba Akpom couldn't score his third goal for the Tigers this season as he played the full game that they drew against Wolverhampton Wanderers in the Championship.

Hull's Nikica Jelavic opened the scoring after 22 minutes from the spot before James Henry scored the equaliser after a poor error from Allan McGregor to earn a draw in Hull's first away game.

Chuba who made only three Arsenal appearances last season has already scored two goals this season against Huddersfield and Accrington, the U-21 international player has an impressive goal-scoring record for England youth teams scoring 19 goals in 39 game.

Damien Martinez made his second appearance for the Wolves in the same game, the Argentinian goalkeeper has made only eight appearances for the Gunners, including four in the Premier League.

Isaac Hayden also started the game for Hull City and played 56 minutes before being replaced by David Meyler.

Jon Toral scored his second goal for Birmingham City as the Blues drew with Burnley at the Turf Moor.

The 20-year-old opened the scoring after 10 minutes with a Superb strike, Arsenal could use a goalscorer and Toral could soon be that man.

The former Barcelona player was on loan to Brentford last season and he scored 6 goals for them helping the Bees to finish fifth and to qualify for the playoffs before losing to Middlesbrough in the play-off semi-finals.

Meanwhile Carl Jenkinson played in goal for the final moments of a 2-1 home defeat to Leicester City when West Ham goalkeeper Adrian had been sent off with no substitutions remaining.

Yaya Sanogo is yet to start for Ajax as he appeared as a substitute in Ajax 3-0 win against Willem in the second round of the Eredivisie.