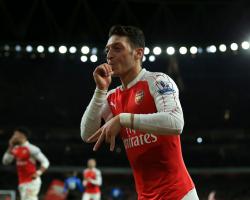 Ozil provided the assist for Gabriel's opener before showing an exquisite touch when combining with Olivier Giroud to score the second as the Gunners recovered from their 4-0 rout at Southampton to move above Leicester into first place.

When asked if Ozil is currently the best player in the competition, Wenger replied: "Look at the numbers on the assists and they speak for him.

"Yes he reminds me of Bergkamp

"I have seen a few good games from Ozil

What's important is that he's convincing everyone that he's not just a very talented player, but someone who is ready to work very hard for the team.

"Overall he is the complete player

I've not seen many players of his quality

He's an exceptional player and you have to give me credit - I always defended that point of view even when people were sceptical.

"What's important is that he becomes as good as he can be, and he is on the way to doing that

At the moment he's absolutely fantastic.

He gives the team confidence."

Keeper Petr Cech set a new Premier League record for clean sheets of 170 games after denying Bournemouth, moving above David James to write his name in the history books.

"Petr can be very proud because it's a remarkable achievement

People don't realise how much commitment, focus and consistency is behind that," Wenger said.

"On top of that he's a remarkably gifted goalkeeper

Wenger was pleased with Arsenal's response after they were humbled at St Mary's.

Southampton was a big one," he said.

"It's all down to how well you respond and that's what was at stake in this game."

To man mark him would be incredibly difficult for any one player," Howe said.

"I didn't enjoy watching his performance because I'm the manager of the opposing team, but from a football point of view you have to respect what he delivered because it was of a very high standard.

"The goal he scored was typical Arsenal, it was a great goal and there wasn't a great deal we could do with that