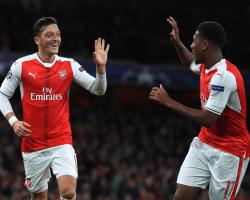 Ozil laid on 19 assists last term but could only claim eight goals - however with six strikes already this term, Wenger believes the 28-year-old can level out those ratios.

"It looks like he has a taste to score goals," said Wenger.

"He's getting in behind now

Before he only liked to come for the ball and provide.

"You want him to be a provider and a scorer and it looks like he's slowly moving towards that better balance."

Wenger had earlier purred over Ozil's form in training, claiming the German "scores when he wants" in his programme notes.

Ludogorets posed a significant early threat on the counter-attack, with David Ospina forced to intervene several times to deny the visitors a goal.

Alexis Sanchez's fine lob and Theo Walcott's goal put Arsenal 2-0 to the good at the break though, before Alex Oxlade-Chamberlain and Ozil's hat-trick finished the job.

Wenger's upbeat mood was only checked by an Achilles knock for Santi Cazorla that could put the Spaniard out of Saturday's home Premier League clash with Middlesbrough.

"In this game a lot is linked with confidence," said Wenger, with Arsenal now unbeaten in 11 matches.

"I feel that at the moment, because we win game after game, our confidence is high and maybe we get over these dodgy periods with less psychological damage.

"We have a good balance in the team at the moment

Maybe we make more of our chances because the final ball is better.

But what is for sure, we score more goals and that's what our game is about

We have a risky game so it is important we take our chances.

"In the first half, it looked like a difficult game because they were dangerous going forward, they had good technique in short space, they are quick on the counter attack.

I think we could have scored more."