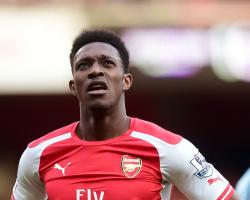 With the decision to operate having come ahead of the September 1 deadline, there would have still been time for Arsenal to move in the transfer window to bolster the attacking options

Former Arsenal midfielder Paul Merson said to have only added veteran goalkeeper Petr Cech, who arrived earlier in the summer from Chelsea, "cheats the fans"

" You either find someone who strengthens your squad or not

Whether we have players injured or not doesn't change the problem, that's what I don't understand from the media," he said

"First of all I am surprised that people accused me of lying when I was in the press conference on Friday morning, I did not know Welbeck had a bad set back

I did not lie to you, I gave you the information I had

Wenger continued: "I have made more than 300 transfers and every time it's a decision to make

Do you buy the player because he strengthens his squad or not? The solutions we had were not convincing at all

"In the end you do not buy to give one hope, you want to buy because the players who come in can help your squad to be stronger

Buying and selling is one way to strengthen your team, but that's not the only way."

Support is believing in the players in the squad and this is a good opportunity to do that for our supporters," he said