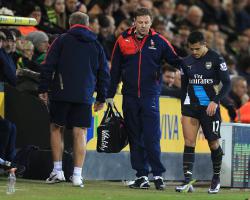 The Chile forward suffered a hamstring injury in the draw at Norwich, while midfielder Santi Cazorla finished the game "playing on one leg" after suffering a blow to his knee.

"At the moment on Alexis, Santi and Mikel (Arteta), we don't know how long they will be out for," Gunners boss Wenger told arsenal.com.

Arsenal have been rocked by injuries all season and Wenger will not want to be without Sanchez or Cazorla for a significant period as the busy festive fixture schedule nears.

"I would have rested him today but he felt perfectly all right before the game and he declared that he had no problem," Wenger said.

Laurent Koscielny (hip) had to be substituted at Norwich, but could feature against the Black Cats.

Left-back Kieran Gibbs is back in contention after missing the Norwich match with a calf injury.

Wenger added: "We will make a decision on Saturday on Koscielny and Walcott, they could both make the squad

Gibbs is available again for the weekend."