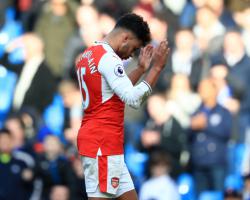 The England international made the error scrolling through Twitter after Arsenal's 3-1 loss at Chelsea on Saturday.

He inadvertently pressed the heart-shaped 'like' button on a post by Arsenal Fan TV, which read "Wenger needs to go".

Oxlade-Chamberlain quickly realised his error and unliked the tweet, but some of his 2.2 million followers had already noticed and screen grabs were taken and posted.

Didn't even realise I had!"