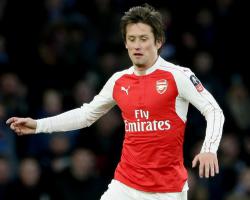 Rosicky has only a few months left on the one-year contract extension he was given in the summer, but, having missed the first half of the season with a knee injury, this latest blow leaves the 35-year-old Czech in a race against time to be fit again before the campaign ends

Arsene Wenger revealed Rosicky had suffered a partial tear of a tendon when he was injured in the FA Cup win over Burnley, his only appearance of the season to date.

Asked if Rosicky had played his last game for Arsenal, Wenger said: "I hope not but the injury is quite a serious one

He will not need surgery."