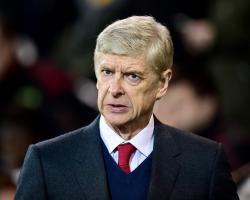 The Gunners are right in the title picture and have the chance to dent the challenge of Manuel Pellegrini's City side when they visit the Emirates Stadium in the last Premier League fixture this side of Christmas.

A 5-2 win at the King Power Stadium and a swashbuckling display in beating United 3-0 at home should give Wenger and his side plenty of confidence heading into Monday's game, especially as no-one else has been able to stop Leicester at home.

"I always took them seriously but when we won 5-2 over there, nobody took our performance seriously," he said of their September success at Leicester.

"They just thought it was normal that we won at Leicester, but ever since you have been able to see that it was a great result and a great performance on the day."

Wenger has spoken kindly of Leicester's unexpected rise to the top of the table, which culminated in a 2-1 victory over Chelsea last week and saw Jose Mourinho lose his job with the reigning champions.

And the Frenchman believes it is good to see a team belying their financial short-comings when compared to the big spenders in the division.

"It's good for everybody in football all over the world to see teams who are not on the biggest budget at the start, that they can compete as well," he added.

While Claudio Ranieri's Foxes remain in the mix, many still believe Monday's protagonists are the two sides more likely to be doing battle for the title when it comes to the business end of the season.

Wenger agrees but does not consider this meeting as any sort of decider.

"I don't know if they are the number one threat but City are a threat," he added.

"If you look at what they have achieved in the last three or four years, their individual quality, you cannot dismiss them as not being a threat to winning the championship

We are in December, we are not fighting for the Premier League on Monday night."