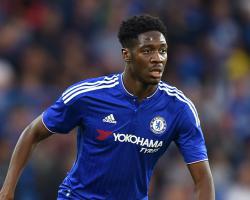 In the case of Kevin De Bruyne who struggling to get playing time he was eventually sold abroad only to return to the Premier League with a rival with great success.

History seems to be repeating with another player that is on the fringes of the Chelsea starting XI and has, according to reports, refused to sign a new contract after becoming frustrated at the lack of football is the brilliant young defender Ola Aina.

Tipped to be the next John Terry the 19-year-old Ola Aina has attracted the interest of Arsenal, Napoli and Bayer Leverkusen, West Ham and Everton

After refusing to sign a new contract the player has been demoted to the U21 setup and a potential exit.

A report in the Mirror claims that Arsenal would include the player in the first-team and add additional competition for centre-back and right-back contention.

The player has a degree of flexibility and can play centre-back or right-back with Wenger looking for a player to eventually replace the 30-year-old Mathiu Debuchy.

Arsenal will need to be quick if they want to secure his services with a long list of suitors looking to secure the player.