Arsenal Report Card: Mid-Season Review for the Gunners in 2019/20

​We're there. The halfway point of the season.

It's about this time where fair assessments can be made of a club's plight thus far, be them sparkling in their praise or damning in their honesty.

For Arsenal, and it really needn't be said, it's most certainly the latter. There are faults from top to bottom, left to right and inside and out. But it's all fine, right? There is a new man in charge and it'll all be rosy from here on in. Well, maybe, but that's not why we're here. We're here to critique, or laud, what's gone on already.

So, without further ado, let's get stuck in. There are going to be few, if any, bright notes as we trudge our way through this.

Because, honestly, league performance this season has reached new levels of atrocious.

Take the numbers first: 19 matches played, five wins, nine draws, five losses. That, is appalling. For a club of ​Arsenal's stature to be returning such a miserable points tally is inexcusable. Furthermore, when you take into account that the rest of the league is faltering left, right and centre, it's even more alarming.

Performances have not just failed to produce points, they've lacked imagination, fight, leadership and excitement. The players have looked lost at sea under the guidance of poor coaching and bemusing tactics, with little to nothing to suggest what fans are seeing is indeed 'Arsenal'.

Home victories over Burnley, Aston Villa and Bournemouth and come alongside away successes over West Ham and Newcastle. Games that the Gunners should be winning. But even then, not one of those outings was in anyway commanding or assertive, and the one goal margins of all those victories (barring the Irons) speaks volumes. The Carabao Cup has been one of few joyful moments this season, and even that was just one game, against a Championship side, at home, on a Tuesday.

A 5-0 romping of Nottingham Forest announced the arrival of Gabriel Martinelli, who has looked confident and assured since being thrust into the action, even at the tender age of 18.

A daunting trip to Liverpool awaited in the round of 16, where nigh-on everything that can happen in a football match seemed to occur inside 90 barnstorming minutes. There was glorious attacking play from both sides, with the Gunners' youngsters playing with a freedom their senior teammates had been unable to exude due to the iron shackles holding them down.

Yet still the multitude of defensive issues came to the fore once more (which we'll get on to) as the game finished 5-5 and Arsenal crashed out on penalties.

Having led so late into the game it was a cruel blow for the team, but let's face it, there are far bigger fish to fry this season. The Carabao Cup was, and is not, a priority. Topping their Europa League group is, well, all you can ask of a side, isn't it? Yes, and no.

It was fortunate in so, so many ways. Beating Standard Liege at home comfortably was...comfortable. Winning away at Eintracht Frankfurt 3-0, was weirdly not. Neither was hosting Vitoria SC at home and relying on two stunning last minute free-kicks to avoid an embarrassment and secure an undeserved win.

Nor was going to the same Portuguese side away from home and scraping a draw. So it came as little surprise that a dejected home outing against the German side would see Arsenal lose, and Unai Emery be sacked. Even after all of that though, bettering Frankfurt's result on the final day would have secured top spot.

Seeing his side fall two goals behind, Freddie Ljungberg was staring down the possibility of facing a relegated Champions League side in the next round. Two late goals secured a draw, and by some miracle, Frankfurt lost in the last minute and the Gunners sneaked into top spot. The truth is, it was anything other than a convincing group stage.

Yet, who did Arsenal get in the next round? A relegated ​Champions League side. Sod's law. For a side that look so bereft of interest and confidence this season, it is remarkable to think that no side in the Premier League ​have accrued more points from losing positions than Arsenal.

Yes, you need to take into account that these are points won back from matches they shouldn't have fallen behind in in the first place, but it does demonstrate that there is some fight left in these players despite the myriad of issues tainting the club at present.

What is there to be built on, though, is that with an achievable, well-executed plan and some decent coaching, that there is a group of players there who have the capabilities of digging deep in matches - so long as they don't find themselves in that position in the first place.

It's something to build on for Arteta moving forward, that's for sure. Is there really any point even clarifying this? It's the defence, in case you genuinely weren't aware.

That's defending throughout the team, by the way. Not just the defenders.

However, particularly in central defence, the team are at their weakest. Not one of the centre-halves is good enough to play for the club. That's just a fact. Rob Holding may be, but injuries have prevented him from staking a claim.

The sheer quantity of shots at goal that Arsenal concede every game is frightening. Like a hot knife through butter, teams carve the Gunners open with consummate ease, peppering Bernd Leno with efforts at alarming frequency, but only made easier by countless individual errors. 理 Now let's look back at some of our best saves this year...

​​see for yourself to realise he's made​Premier League

He hasn't deserved the level of defending he's faced the brunt of this season, with such inept players in front of him forcing him into superb save after superb save. Aubameyang has been very good once again, but Leno has been excellent. The Premier League, FA Cup and Europa League are all that's left.

That said, enough to see Arsenal sneak into the top four? Unfortunately, no.

Enough to succeed where Emery failed and win the Europa League? Possibly.

Enough to get them past Man City, inevitably, in round four of the FA Cup after scraping past Leeds? Nah. 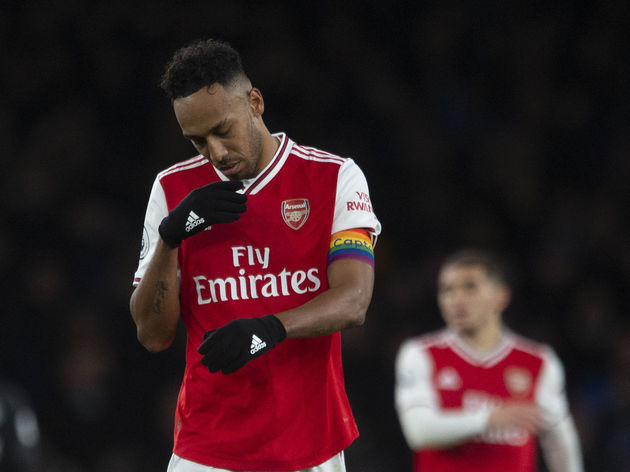 11th in the Premier League table after 19 matches and an equal distance between the top four and bottom three, yeah, it ain't going to be a particularly rousing final assessment.

Arteta has been presented (forced) with the challenge of returning Arsenal into the Champions League through whatever means necessary, and while that is still a mathematical possibility, few can actually envisage that happening.

The Europa League is still there for the taking. However, Olympiacos are certainly no walkovers and that tie could spell the end of elite European competition hopes before the end of February.

All in all, pretty darn rubbish. No hard feelings Arsenal, but you don't deserve anymore than this:
​
​Grade: 2/10