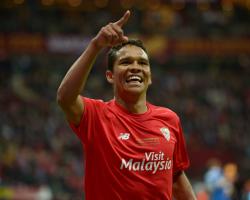 The ÃÂ£21million rated Colombian international has been linked with a host of European clubs and a move away from La Liga after playing an integral part in Sevilla's successful Europa League campaign.

The Gunners won't have a clear path to Bacca's signature though, with Manchester United still interested in the striker after letting compatriot Radamel Falcao return to AS Monaco and question marks over Robin van Persie's long-term future under Louis van Gaal.

Bacca has scored 28 goals in all competitions this season and has bagged 49 goals in all games since joining Sevilla in 2013.