Teams have come close to matching the incredible achievements of that Arsenal side of 2003/04, but no other group of players has ever been able to play 38 league matches in a season without losing at least one of them. 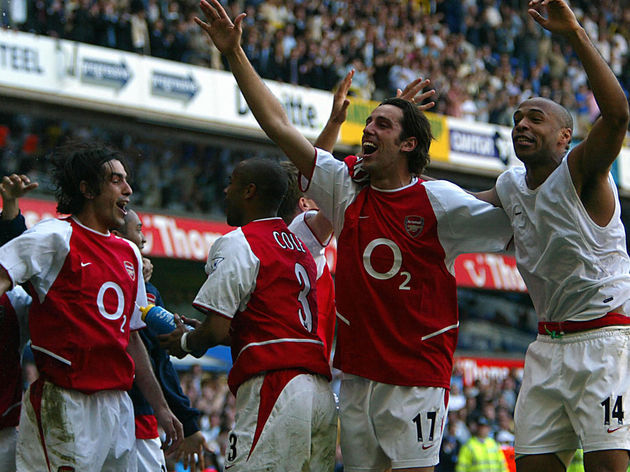 But talk of the mighty Invincibles resurfaced this year, as Jurgen Klopp's Liverpool bulldozed a whole series of records on their way to becoming the soon-to-be champions. And there was one accolade they were very, very close to cracking.

It seemed written in the stars that your beloved Invincibles would be remembered as 'the first top-flight team to go unbeaten in the Premier League era - but not the best'.

But Watford said 'No'.

The Hornets spanked ​Liverpool 3-0, and in doing so, ended their 44-game unbeaten run. Weirdly, it's probably the best thing that will happen to Arsenal all season...

What did ​Arsenal Twitter make of it, you ask? Not much..  I wouldn't think.

This tweet summed up the emotions of the majority of Arsenal supporters at the final whistle, so much so that it received more likes than Bruno Fernandes' announcement tweet for ​Manchester United!

Not sure if i'm impressed by that or not really...

Arsenal supporters haven't had much to hang their hat on in recent years, so maintaining this bit of history appears to be pretty important to those in north London.

“Lol we’re both going to be the Invincibles get over it!”

Once in a lifetime achievement. Don’t let the haters tell you otherwise. @Arsenal are different, and for a good reason. pic.twitter.com/Cdw269l4Cp

I was born in Watford General and I've rarely been more proud of it.

It was clear that this nightmare had been looming over Gunners' supporters, getting closer week by week.

"My time here's coming to an end son. I only have one request, should you leave Arsenal I want you to go to Watford, share with them all that I have taught you and help them stop Liverpool from winning the league unbeaten. My legacy is in your hands now" pic.twitter.com/TzMjFMLtBR

Sold Oxlade-Chamberlain to Liverpool just so he’d have a shocker in midfield against Watford 2 years later to end Liverpool’s run and help Arsenal retain their 49 unbeaten record.

Some went even deeper...

Arsene Wenger left Arsenal in the Europa League so Arsenal could face Rennes, where Ismaila Sarr played. So that Sarr could attract interest from Watford & bring him into the Premier League. For Sarr to then end Liverpools unbeaten run.

And of course, there were those who embarrassed themselves by basking in the misery of others' failings a little too much...

WE'RE BY FAR THE GREATEST TEAM THE WORLD HAS EVER SEEN

Liverpool just got destroyed 3-0 by Watford. This humiliation alone means they don’t deserve to be mentioned in the same breath as the unbeatable Arsenal Invincibles. https://t.co/azxG0Om86e

We have Watford at home on the final day of the season.

Give them a guard of honour prior to kickoff. Give them the win if they need it to stay up. Do whatever is necessary. @Arsenal.

Even some of the actual Invincibles themselves got involved!

That’s just made a poor week, bearable... #watfordfc - we might be out of #Europe but at least the #invincibles can breath a sigh of relief - I might not be one of them but we were the #incredibles #COYG @Arsenal

We became legends.
We still are... and remain unbeaten! 
Because we are @Arsenal. ⚪

And of course, three cheers for the team who made this all possible - since ​Arsenal would never be able to beat this Liverpool team themselves in a million years.

​​Small victories, Gooners. Take what you can get, eh?