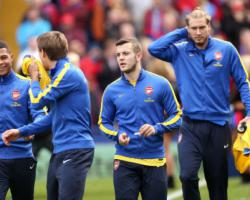 Arsenal manager Arsene Wenger wants his team to focus on their own strengths and not get carried away in the hype surrounding Manchester City as their Barclays Premier League title rivals look to chalk up 100 goals.


Following the 5-0 demolition of Blackburn in their FA Cup third-round replay, City stand on the brink of a century in all competitions when they host relegation-battlers Cardiff on Saturday.


Despite all of the plaudits coming the way of Manuel Pellegrini's free-scoring side, it is Arsenal who remain a point clear at the top of the table ahead of Saturday's match with Fulham after they won at Aston Villa on Monday night to move back above City and Chelsea.


Wenger accepts while Arsenal may always be playing catch-up on City in terms of financial muscle, they can prove their own worth with consistency on the pitch with what would be a fifth straight league win against the struggling Cottagers.


"In terms of their resources, no (we cannot compete) because they have unlimited resources. But with our resources available, we are ready to fight," said Wenger, who indicated he may have now made a decision on whether to extend his contract.


"I think what is very interesting is what we want to do and how we want to play. Can we beat these teams?


"It is even greater because they are top quality, which I acknowledge, but we want to beat them and therefore with our style, we need to get our resources out there in every game to have a chance to do it."


Wenger added: "I always expect the best from our team. If you look at the last 12 months you will see that our form has been consistent, so let's go from strength to strength and develop our game."


Wenger remains confident Arsenal can prove the bookmakers wrong and last the distance in the title race.


"Let people make Man City or Chelsea the favourites, we can accept that," he said.


"The reality is that on Saturday afternoon at 3pm, that is where you can perform and where we have an opportunity to convince people that we are serious about what we want to achieve."


Wenger added: "We know that one of the targets in the second part of the season is for us to be strong at home and recently we have done that, so we want to continue that.


"Tomorrow of course is a very important game, it is a derby, and because now we go into a part of the season where every game becomes massive."


Czech midfielder Thomas Rosicky could play in a protective mask after surgery to correct a broken nose suffered when he was caught by a stray elbow from Aston Villa forward Gabriel Agbonlahor, although full-back Nacho Monreal is a major doubt after twisting a ligament in his foot.


Captain Thomas Vermaelen (knee) is also sidelined, along with midfield duo Arteta (calf) and Aaron Ramsey (thigh). Striker Nicklas Bendtner could return from his ankle injury in the FA Cup tie against Coventry next Friday night.


Fulham manager Rene Meulensteen admits he has no idea what to expect from his team on Saturday.


The Cottagers head across to north London on the back of their midweek 3-0 FA Cup third-round replay win over Norwich.

However, Fulham will need to produce a much-improved display from the one they gave last time in the league when Meulensteen's men were thumped 4-1 at home by fellow relegation-battlers Sunderland.

But he cannot guarantee what Fulham will be able to produce, accepting he is still learning about his team, who he compares to a new set of playing cards.

"And that is the situation you get when you are thrown in and taking over at a club," said Meulensteen, "because you are playing a deck of cards that is not yours."

The Dutchman has won four, drawn one and lost five of his 10 matches in charge since taking over from Martin Jol.

"You look at it and you try to play the best hand in different situations and that is what I have done - I made nine changes against Norwich," Meulensteen said.

"You are still trying to get to the situation where you say 'now I know which cards suit best'."

Meulensteen has been impressed by the Gunners' consistency as they continue to stay just ahead of Manchester City in the championship race.

"Arsenal have got a very good chance compared to the previous seasons, but Arsenal have got no secrets and they have had no secrets for the last eight years. They play as they play - they won't change. That is the way they are," said the former Manchester United coach.

"For many seasons they have picked up the accolade of being the team that plays the most beautiful football.


Meulensteen could retain Darren Bent in Fulham's starting XI after he scored against Norwich.


Fernando Amorebieta is a doubt because of a knee problem but captain Brede Hangeland could make his first league start since October after returning from back surgery against Norwich.