Arsenal vs Tottenham: 7 Classic Clashes Between the North London Rivals

Now we understand just how important the north London derby is, and how it came about, we can properly kickstart the 50 Greatest Derbies of All Time series by taking a trip down memory lane and take a look back on the most fantastic fixtures played between Arsenal and Tottenham.

If ever there was a particular fixture that was renowned for its goals, late comebacks, drama and controversy, it is well and truly the North London derby. Look no further than this wonderful selection of seven classic contests that have taken place in recent times.

One thing's for sure - after reading this, the next NLD won't come around soon enough. Anyway, let's get on with it, and begin with... ...Thierry Henry and his wonder goal against ​Tottenham at Highbury in 2002. Every Arsenal player must dream of scoring against Spurs. Well, imagine picking the ball up inside your own half, leaving several Spurs players in your wake as you glide past them, and sticking the ball into the back of the net.

Well that's exactly what Henry did in the 13th minute of this particular north London derby. And, he followed it up with quite the celebration - running the length of the pitch, and celebrating in front of the visiting Spurs fans.

What a man, what a goal, and one of the iconic north London derby moments. 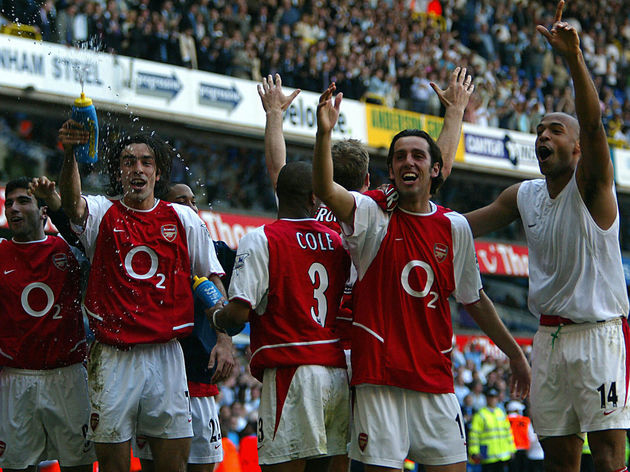 ​For ​Arsenal fans, it doesn't get much better than this - travelling to White Hart Lane knowing that a point would be enough to secure the league title. On Tottenham's home turf...let that sink in for a minute.

And Arsène Wenger's side were 2-0 within 35 minutes after scoring two sensational team goals. Spurs may have came back to earn a point but it didn't matter - they had allowed their great rivals to win the ​Premier League title on their own patch.

The implications this particular fixture produced remain unparalleled, and that is why it is one of the classic north London derbies. If any Spurs fans are reading - don't worry! It's going in chronological order, and there will be a couple of classic clashes that you can enjoy more than the ones selected thus far.

But this nine-goal thriller really was something, and is perhaps deserving of the 'most classic derby' label. The Gunners ran out 5-4 winners, with every single goal being scored by a different player - it remains a Premier League record.

Spurs took the lead initially, but with an hour gone the Gunners were 3-1 up, with Henry and Patrick Vieira among the scorers. It then went 2-3, 2-4, 3-4, 3-5, and 4-5 in that order. And breathe, goodness gracious me! That's what can happen in a north London derby.

Here you are Spurs fans! It might not be a win, but it may as well have been. And, in a similar trajectory to the 4-5 fixture from 2004, this one was a topsy-turvy affair.

Ex-Arsenal boy David Bentley put Spurs ahead with a stunning 45-yard strike, but the Gunners were 3-1 up just after the hour mark after Emmanuel Adebayor scored in the 64th minute. How did it pan out from there?

Well, Darren Bent nabbed one back in the 67th minute, before Robin van Persie made it 4-2 a minute later. Could Arsenal hold on? Well no...and Spurs launched a sensational late comeback, scoring in the 89th minute, and then equalising in the final seconds of extra time. Excellent stuff from the Whites. ​One of the great days out for Arsenal fans at the Emirates Stadium. The north London derby hype lived up to the billing as the Gunners produced a scintillating performance to win 3-0.

But it was a particular two minute period late in the first half that elevates this particular game above others. Van Persie opened the scoring on 42 minutes, and no sooner had Spurs taken the resultant kick-off, Fabregas stole the ball, waltzed his way through the Spurs defence, and planted an excellent finish into the bottom corner.

It just happened so quickly - within 11 seconds to be precise! Sky Sports hadn't even finished showing the replay of the first goal before the cameras cut to Fabregas racing away celebrating Arsenal's second. Poor Martin Tyler! ​Spurs' 3-2 victory at the Emirates during the 2010/11 campaign was their first victory on Arsenal's home turf for 17 years. And what a spectacle it was.

As is a trend with plenty of classic derby games, a remarkable comeback was launched by the side who ended up victorious. This time, it was Spurs who painted north London lilywhite. Arsenal were 2-0 up after 30 minutes before Harry Redknapp's side scored three times in the second half to complete a spectacular 3-2 turnaround.

#OnThisDay in 2012: @Arsenal 5-2 @SpursOfficial.
Arsenal came from 2-0 down to beat 10-man Spurs for the first time in two seasons in the league. @Sagnaofficial, @Persie_Official, Tomas Rosicky and Theo Walcott (2) got the goals. #AFC gbeng⚪️ pic.twitter.com/TUP59o9Ot9

To finish, we have yet another classic comeback to enjoy. This time, it was Arsenal who ended up worthy winners. And yet again, the winning side went 2-0 down before going onto score five, yes five, to make it 5-2.

Theo Walcott scored a lovely little brace, Van Persie scored a cracker, and Bacary Sagna and Tomas Rosicky chipped in with impressively worked goals too. A day to cherish for the Gunners as north London was red once again.