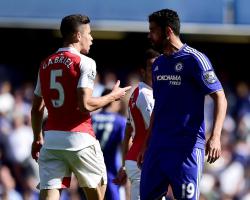 The centre-back was dismissed for kicking out at Chelsea forward Diego Costa during Saturday's ill-tempered clash at Stamford Bridge.

However, the Football Association announced in a statement on Tuesday it has accepted Arsenal's challenge to the decision and withdrawn the three-match suspension.

Gabriel still faces a separate charge of improper conduct for his reaction after being shown the red card by referee Mike Dean.

The FA statement read: "Arsenal's claim of wrongful dismissal in relation to Gabriel has been upheld following an independent regulatory commission hearing.

"The player's three-match suspension has, therefore, been withdrawn with immediate effect.

"Gabriel was dismissed for violent conduct during the game against Chelsea on Saturday [19 September 2015].

"The player is currently subject to a separate FA charge of improper conduct in relation to Saturday's game and has until 6pm on Thursday [24 September 2015] to reply."

Gabriel lost his cool following a confrontation with Costa, who had earlier pushed Arsenal defender Laurent Koscielny in the face and then barged him to the ground.

There was a precedent for the suspension being overturned.

Last season, Chelsea midfielder Nemanja Matic saw his ban reduced after reacting to a dangerous tackle by Burnley's Ashley Barnes, with the governing body accepting he had used a moderate "level of force" when pushing his opponent.

Gabriel, however, could still be sanctioned for failing to immediately leave the pitch following his red card, as the player tried to then confront Costa before being restrained by his team-mates.