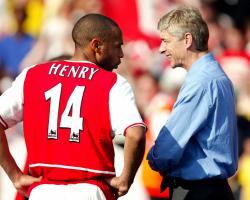 The Gunners signed just one player, Petr Cech and they were the only club in Europe's top five leagues not to make an outfield signing.

Speaking to Sky Sports News, Henry said: "I do not know if the boss wanted Benzema or not, but the player must also want to come."

"What are you going to offer to the guy who is playing for one of the best teams in the world, knowing that he is playing there week in, week out, and performing well?

"But how do you get Benzema from Real Madrid when he plays there and Cavani also from Paris Saint-Germain - he scored again at the weekend? It is a difficult one

"I do not think he did not want to bring in anyone, he wanted to bring players as we know, but it did not happen."

"Right now they are already five points behind City, still have not won at home, won two games by an own goal, which is actually their best goal scorer at the moment," he said

And that is his prerogative.

"I think he should have tried to bring players and I think he did try, it could not happen, but I still think that team needed some players."