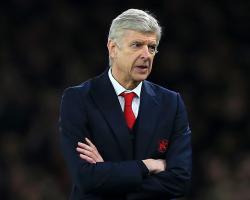 The north London club, who are three points adrift of Leicester as they bid to win their first Barclays Premier League title in over a decade, signed Egypt international Mohamed Elneny earlier this month

But Wenger, speaking ahead of his side's FA Cup fourth-round tie against Burnley on Saturday, is anticipating a quiet deadline day at the Emirates Stadium

Asked if any more players could arrive before the window closes, Wenger said: "No, not at the moment

"We have 23 players in training - and plus two is 25 - so unless people go out we are not on the verge of bringing anybody in."

Francis Coquelin, sidelined since November with a knee problem, and Tomas Rosicky, yet to play this season, could feature against Burnley on Saturday.

Danny Welbeck, who has not played in 10 months following a knee issue, is also closing in on a first-team return after resuming full training.

"It has to be gradual, and he has to go through under-21 games," said Wenger of the England forward.

"Ideally I don't want anyone to make a mistake but that is part of defending as well," Wenger said

The risk is part of the game and you have to feel comfortable with that."

Regarding his own future, Wenger, who has 18 months to run on his current contract, added : "I am completely focused on doing well and give everything until the end of the season and then go for the next season hopefully

"I don't imagine at this moment to manage anywhere else

Will I stop working once I stop managing at a competitive level? No, I will always try to work if I have health and try to be useful.

"Maybe it will be a different level

It could be managing kids or developing young players but I will not run for FIFA."