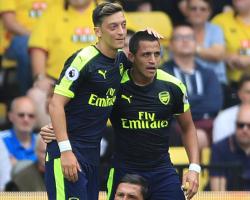 The pair have just over a year remaining on their current deals at Arsenal and both are holding out for parity with the highest-paid Premier League players.

There remains uncertainty over whether Ozil or Sanchez can be tempted into extending their contracts at the Emirates Stadium, with Wenger's own future still unknown.

The Arsenal boss has said he has made up his mind on whether he will remain in charge beyond the end of the current campaign but is yet to reveal if he will sign a two-year contract which is currently on the table.

But with four league defeats in their last five games and six losses in nine across all competitions, Wenger wants to focus on addressing an alarming slide in the Gunners' form before entering negotiations with two of the club's key players.

"At the moment we have not got an agreement," he told beIN Sports when asked about Sanchez's future.

"We have decided to focus on the end of the season and talk about it in the summer, it is the same situation with Ozil because once you don't find an agreement and it [the negotiation] lasts, it is not good so it is better you get it out and sit down in the summer."

Wenger has said in the past he would rather let both players run down their contracts and leave for free in 2018 than sell them this summer, but it remains to be seen if that resolve will be tested.

The 67-year-old was less forthcoming about his own plans, having announced after Saturday's 3-1 defeat to West Brom that he has made up his mind on whether he will stay at Arsenal.

Wenger has increasingly split the Arsenal fan-base with two protests being held before recent matches and two planes flown over the Hawthorns carrying conflicting messages - one of support and one against any new deal being signed.

The Frenchman insisted on Tuesday that he had not signed a deal to take over at Paris St Germain next year and reckons he will remain loyal to Arsenal irrespective of whether he leaves in a matter of months or years.

"My news is that I have no news for you," he said when questioned about his decision.

"At the moment we are going through a difficult period with the results so I think it is much more important to focus to get it right again.

"We suffer a lot at the moment but when you take a little distance and put into perspective, we have two games behind, we are two games behind and in the semi-final of the cup to prepare against Manchester City so our season will be decided on how well we respond now to the difficult period we have had."

Asked about the differing plane messages flown above the stadium during the loss at West Brom, Wenger again defended his two-decade reign.

"Of course (I have mixed emotions)," he said.

"If you look at where the club was when I arrived and where it is today, I think I'm quite proud of what I did for the club.

"After that we live in a period where people are very demanding, I can understand that but I know as well that.

"I have guided this club through very difficult periods with very, very, very limited resources and I managed always to get the best out of the team and that is what I will do as long as I'm at Arsenal Football Club.

"You can basically say if you don't win the championship it is not a successful season, I understand that but take a club like Liverpool, they have never won the Premier League and they are a big club.

"That of course will be a disappointment not to win the championship, after that you have to go as far and do as well as you can.

My job is not to judge

It is to produce and let other people judge."