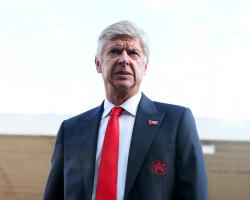 They are also only one point ahead of Liverpool in the fourth and final Champions League qualifying spot.

But he has urged everyone at the club to unite in this tough period, with a home game against Hull coming up on Saturday lunchtime.

"Ideally you want everybody to be happy," he said when asked what would influence his decision on whether to sign a new contract

"Arsenal is made of special strengths, and that strength is to be united when things go wrong."

Wenger was asked whether the club would be interested in a bid for out-of-favour Manchester City goalkeeper Joe Hart, amid speculation Gunners number one Petr Cech may be dropped against Hull.

"I have three world-class goalkeepers and I am happy with the three I have," he said.

The England midfielder is therefore likely to return to the Emirates Stadium in the summer.

Wenger said quotes from French defender Laurent Koscielny which appeared to question the team selection against Chelsea had been "lost in translation".

"That story has been twisted," he said.

Asked if he had spoken to Koscielny about the reported remarks, Wenger said: "Yes of course

But we can deal with that."

Wenger said a decision is expected to be taken on Friday over whether Spanish full-back Hector Bellerin can feature against the Tigers.

The 21-year-old suffered a head injury as he challenged in vain to stop Chelsea's Marcos Alonso heading in the Blues' opener at Stamford Bridge last Saturday.