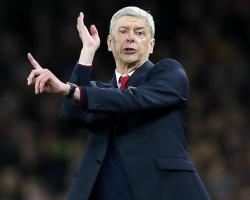 The Frenchman takes his team to Southampton on Boxing Day evening knowing they could end the night top of the Barclays Premier League.

That comes on the back of three successive league wins, including Monday's crucial victory over title rivals Manchester City at the Emirates Stadium.

Southampton are not in the type of form that saw them finish a club-record seventh last season but they still have the players to provide upsets.

Last year Ronald Koeman welcomed Arsenal on New Year's Day and saw his Saints pick up a 2-0 win thanks to some calamitous defending from the visitors.

But after that set-back, Wenger's men have gone on to amass 10 points more than any other Premier League side in 2015 and, with two home games against Bournemouth and Newcastle following their trip to the south coast, momentum is with Arsenal as they look to overhaul high-flying Leicester

Wenger, however, knows all-too well the fragility which accompanies such momentum.

"The confidence is very high," he said.

"Confidence is built up very slowly and goes very quickly, so let's take care of our next performance.

Nobody can predict what can happen in the next 17 games for example and you just want to go with the same attitude and spirit.

"The only thing I can say is 2015, if you look back and try to analyse it, we have been consistent.

"We have had quite a positive year and stabilised our defensive record and improved our record against the strong teams in the Premier League so it looks like we are on the right train going the right way."

With the title race likely to remain open for some time, Wenger is making no predictions and keeping a lid on any pressure surrounding his players delivering a first title since 2004

"The real pressure is not to go down," he said.

"All the rest is positive pressure

I believe that football is down to performance

Who will win the title? Nobody knows.

It's down to being pragmatic, putting the effort in to win your next game and worrying about your performance.

At the moment, it's by miles too early to say who will win the Premier League

Wenger will not be able to welcome back any of his injured players for the game at Southampton as Alexis Sanchez's hamstring set-back is likely to keep him out throughout the festive program.

Club-captain Mikel Arteta is close to a return while Wenger is hoping to have Jack Wilshere and Danny Welbeck available in February.