Arsene Wenger expecting a strong Liverpool to face his Arsenal side 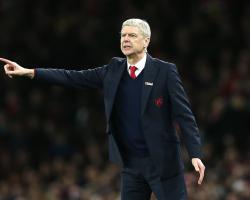 The Reds face an FA Cup third-round replay against League Two Exeter after Jurgen Klopp's much-changed and inexperienced side was held to a 2-2 draw at St James Park.

Klopp insisted he had no option but to play a youthful team as injuries continue to decimate his squad - but Wenger, whose league leaders made five changes for their 3-1 cup win over Sunderland - reckons Liverpool's teamsheet on Wednesday will be much more familiar.

When asked if he expected some of Liverpool's biggest names to return, Wenger replied: "Yes, don't worry, Arsene is a very good doctor - they always heal when they play against us!

They had many injures and I think they didn't want more injuries before an important week."

Many Premier League clubs made several alterations for their respective FA Cup third-round ties, but Wenger insists you cannot be considered a "big club" if you are not willing to try and win every tournament you enter.

"You can not say 'we are a big club' and not go for competitions," he said.

"That is for me impossible

Why? Because they are big clubs

You can't say 'we move out of a cup competition, a national cup'."

With an ongoing title tilt and a Champions League clash with Barcelona on the horizon, Wenger feels keeping the momentum in one competition can help in the others - even if it leads to tired legs.

"It has positive impact and negative impact," he added.

"Once you're on a roll, you can rotate, if you have no injuries

Everybody is mentally focused to pull in the same direction.

"It's easier to keep everybody on board because you have always the next competition, and everybody thinks I have a chance to play

That is the positive and negative is he fatigue factor, the injuries at the end of the season."