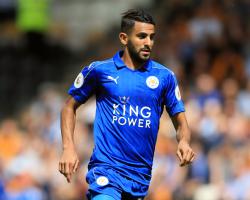 Mahrez, 25, has recently signed a new deal with the Premier League champions after being heavily linked with a move to the Gunners.

Wenger preferred not to discuss whether Mahrez was indeed an Arsenal target, but was more forthcoming about the Algeria international's obvious talent.

The former Le Havre man provided 11 Premier League assists as well as 17 goals last season and Wenger says that shows Mahrez is one of the most dangerous forwards in the country.

"I don't want to speak about individual players," Wenger replied when asked about a potential summer move for Mahrez.

"He has been outstanding

If you look at his numbers, certainly he was in the top three in the league last year.

"If you consider the number of goals and assists he had, he had the best combination in the league."

While Wenger has identified a new defender as his main target before the transfer window closes, a striker also remains on the agenda after the high-profile rejection from Leicester forward Jamie Vardy.

The England international, who finished last season with 24 league goals, had been mulling over an offer to join Arsenal as he linked up with the national squad at Euro 2016 but ultimately decided to remain at the King Power Stadium

Asked if he was respectful of Vardy's decision, Wenger told BT Sport: "Of course

"When you go for somebody you want him to join you but you have to respect the decision, we are all professional people.

"What matters is that once you commit somewhere you give 100 per cent, that is what it is to be professional, he has decided to stay at Leicester and I respect that fully."

Wenger has a number of selection decisions to make ahead of the trip to Leicester, with Laurent Koscielny, Mesut Ozil and Olivier Giroud all having been rested for the 4-3 loss to Liverpool following their Euro 2016 exertions.

Aaron Ramsey and Alex Iwobi must also be replaced in the starting line-up having both been forced off with injuries during the game.