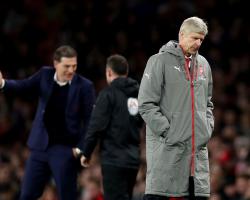 Mesut Ozil spearheaded a morale-boosting 3-0 win for the Gunners, their first in the league since February 11, with Theo Walcott and Olivier Giroud also getting on the scoresheet to help Arsenal leapfrog Manchester United and move up to fifth.

"And when you're at the club for such a long time and you really care about people who care about the club, you know how sad they are when it doesn't go well.

"So I can take care of myself because I am used to dealing with difficult periods but you want people who love the club to be happy, so I'm happy."

While Wenger was able to put questions over his future to one side for the time being, a fifth successive league defeat heaped more pressure on Hammers boss Slaven Bilic, and Saturday's fixture against 18th-placed Swansea has become a must-win

"It is the key point for me to get that confidence back before Saturday," Bilic said.

"We need one win and it will change everything for us

Three points at this stage of the season are massive.

"We are looking over our shoulders, of course, and there is no point in hiding it

It's not being negative, it's being realistic.

"I told the guys 'okay, forget tonight, we have a few massive games in front of us'."

Bilic also confirmed that the reason behind Michail Antonio's half-time substitution was due to sickness he suffered hours before kick-off - but Bilic expects him to be fit for the weekend.