Arsene Wenger- Its more difficult to prepare against Hull than Barcelona 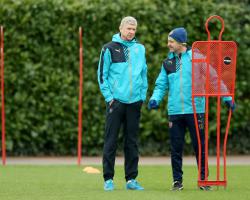 The Gunners face a tough examination when they come up against Champions League holders Barcelona on Tuesday night as they look to progress past the round of 16 stage for the first time in five successive seasons.

With Lionel Messi, Neymar and Luis Suarez forming a formidable front three for the visitors to the Emirates Stadium many - including Wenger - make the Primera Division side favourites for the tie.

Wenger believes Barcelona currently have "top, top class" attacking talent but says they have a chink in their armour and his players will take no preparing for the task at hand.

"Honestly, of course the difficulty of the task is completely different but it is more difficult to prepare against Hull than Barcelona," he said.

"Against Barcelona everyone is naturally focused

It is more to create belief and confidence, because Barcelona are super-favourites in this game.

"Against Hull it is more to raise the urgency level and convince everybody that it is a very difficult game.

"Tomorrow everyone is convinced that we absolutely need to have, as a squad, total focus to have a chance and that is what I try to raise

Belief, confidence and let's go for it.

"Of course, there is no team - our world is not perfect and no team is perfect

But they are not far from it, Barca, I must say.

"We have to use every moment in the game where we have the chance to score, and as I said after the Hull game, we had 70 per cent of the time the ball but we didn't make a lot of it

Arsenal have suffered from poor results in the opening leg of knockout Champions League ties in recent years, last season losing 3-1 at home to Monaco before being eliminated on away goals following a 2-0 victory in the principality.

And Wenger wants his squad to show they have learned from previous mistakes as he looks for the right balance to pull off a result on Tuesday.

"It is a good opportunity to show we have learned because it is true we have given ourselves a difficult task after the first home leg and maybe after we have been a bit too keen to make the difference in the first game," he added.

"We need to find the right balance between being audacious because that is what you will need to be against Barcelona.

"We need to be strong defensively as a unit and not put ourselves in front of a very difficult task in the second leg."

Arsenal only scraped through to the latter phases after staging a comeback in their group having lost three of their opening four matches.

A 3-0 success in Olympiacos on the final matchday saw them edge through at the expense of the Greeks and Olivier Giroud, who scored a hat-trick in Piraeus, has pointed to Arsenal's strength in depth as a positive as they look to not only roll over Barcelona but also challenge for the FA Cup and Barclays Premier League trophies.

"Obviously Barcelona are favourites," he said.

"It's the Champions League against Barcelona but we have good quality this year, even if we had a lot of injuries, but we did well during a tough moment in the Autumn and we have our players back.

"We are very happy with that

For example Danny (Welbeck) made the difference against Leicester, and I was very pleased for him

We will need everybody, we have a strong squad and that is why we can play in every competition."