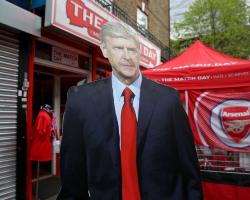 I used to laugh at some of the other Arsenal fans when they said "Arsene is behaving as though it is his own money" I used to believe those comments were cheap shots well below the belt.

It is no secret that Arsene is very well paid

No-one can begrudge him this salary

Only Jose and Pep can boast a higher salary with the latter incredibly earning almost double Wenger's salary. His recent comments about 600 employees needing to be paid their salary shines a very unhealthy light on Arsenal

When has a manager from another high profile club ever come out to the media and said something along these lines? Admittedly there has never been the media circus associated with other clubs, but the flipside of this is that one can argue we, as a club, have fed and nourished this media circus with our incompetence in the transfer market

Arsene is most definitely in the trenches and he is in no hurry to take off his hard-hat.

Not to mention Real Madrid are also in interested in him as a replacement for Sergio Ramos (maybe we can then buy Ramos!)

But Holding presents a massive risk for Wenger, as the bottom line is he got him on the cheap; ÃÂ£2M from a relegated Championship club when he had ÃÂ£200M in the bank!

This season promises to be full of surprises

Will it be Arsene's last year? Will Arsenal finish in the top 4 again? Will we be serious title contenders? Will we sign a decent centre-half to accompany Laurent Koscielny? Will we buy a genuine goal-scorer? All these questions remain unanswered

Arsenal and Arsene has proved that we bounce back from adversity

Spurs fans will vouch for this

But something tells me this season might be a different story if those signings don't come in before the end of the current transfer window.

Author Fevzi Hussein can be followed on Twitter @fevzihussein