Arsene Wenger points out quality of his two goalkeepers 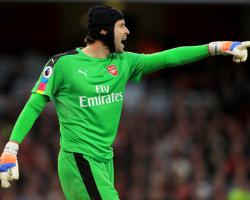 And when Cech regained his starting shirt on Saturday, the 34-year-old picked up that mantle, to leave manager Wenger to rave about his riches in the position.

"We could have lost the game in the first half," said the Arsenal manager.

"This week I must say our two goalkeepers had two great performances, Ospina on Wednesday night and now Petr Cech.

"That shows you how important it is to have two top-class goalkeepers."

Arsenal spurned a string of chances to celebrate Wenger's 67th birthday with a seventh consecutive Premier League win on Saturday.

The Gunners did extend their unbeaten streak to 12 matches in all competitions, but boss Wenger was left in parts frustrated not to win, but also relieved Cech staved off defeat.

France striker Giroud could feature for the first time since September in Tuesday's EFL Cup clash with Reading at the Emirates, but Cazorla faces a fitness assessment on Monday.

"We had 75 per cent possession but we didn't have our usual pace in the combination or enough sharpness in our movement," said Wenger.

"In the end we couldn't win it

At least we were intelligent enough not to lose it."

Middlesbrough boss Aitor Karanka was delighted to secure a confidence-boosting result, even if the Teessiders did stretch their winless league run to seven matches.

"It is great to come to the Emirates and for the best Arsenal player to be Petr Cech," said Karanka.

"I think we should have won the game because we had good chances.

"We knew that we couldn't park the bus, but they have a lot of quality players

We were organised and our transition play was very good.

"But we have to keep going because we have now shown we can compete against the best teams in the Premier League."