Arsene Wenger praises Arsenal for standing up to the Stoke battle 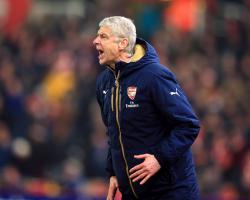 Mark Hughes has promoted a more aesthetically pleasing brand of football since succeeding Pulis, yet Wenger felt their hosts still presented a physical challenge that they were forced to overcome in a 0-0 draw.

In a clash that featured few chances and no yellow cards, goalkeepers Jack Butland and Petr Cech took centre stage with brilliant saves from Olivier Giroud and Joselu in either half.

"Overall it was a battle, an old-fashioned Stoke battle," Wenger said.

They went for a very direct game and we had to show physical response, solidarity, fighting spirit, togetherness - which is what we did.

They were really up for it, they really tried from the first to the last minute.

"We of course wanted to win the game but, looking at the history we have here, it is a positive result

Looking at the results of the other teams that play at the top, it's a positive result

Although Butland produced a terrific stop to smother Giroud before the break, the visitors struggled to create too many chances without injured playmaker Mesut Ozil.

The German was watching on television instead because of a foot injury and illness, yet Wenger expects the man leading the Premier League in assists to be back against Chelsea on Sunday.

"Yesterday morning he was not very well," Wenger revealed

I think he should be back for next Sunday."

Stoke boss Hughes was perplexed by Wenger's insistence they had to contend with a robust approach.

He said: "I don't think there was a yellow card, was there?

I thought it was a good football game, with both teams trying to win a key Premier League game

That's certainly what we were doing."

Having already beaten both Manchester clubs and Chelsea at home in the league this term, the Potters' hopes of defeating Arsenal on their own patch too were thwarted by Cech's second-half brilliance.

He followed up a one-handed save from Joselu by denying Bojan from the rebound before using his feet to repel Joselu again late on to record the 172nd Premier League clean sheet of his career.

"I didn't think there was too much between the two sides," Hughes added

"From our point of view, that shows how far we're progressing this year - we're prepared to go toe to toe with every team in the Premier League and see where it takes us

"We've added Arsenal to Chelsea, Man City, Man Utd, teams that are elite teams in the Premier League and Europe and found it very, very difficult to get positives results

I'm sure Arsenal and Arsene are delighted that they've come here and got a point out of it."