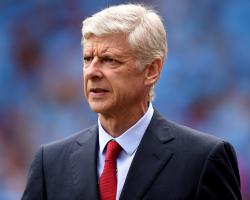 The Gunners were the only team from the top five European leagues not to sign a single outfield player during the summer transfer window - despite fans and pundits alike claiming Wenger needs a proven goalscorer to challenge for the Premier League title.

Goalkeeper Petr Cech was the sole arrival at the Emirates Stadium whereas rivals Man United had a busy window that ended with the ÃÂ£36million acquisition of 19-year-old Martial from Monaco.

The deal sees the forward become the world's most expensive teenager but, having scored 15 goals in 70 appearances for his former club, Wenger believes the amount shelled out by United shows that prices are inflated.

"What happened last night with Monaco, who sold Martial to Manchester United for 80 million euros - Martial scored 11 goals in the French championship - that sums it up well," he told beIn Sports.

"That means it's not the money that's missing at the moment, it's not the desire of investment that is missing, it's the number of players available who can strengthen the big clubs."

Wenger has been widely criticised for his lack of transfer activity but after dipping into the market in the previous three windows, the Frenchman insists he is pleased with his recent signings.

"Am I happy with the investment I make? Yes, every time," he said.

"The problem at the moment is finding the players that guarantee you are a better team afterwards."