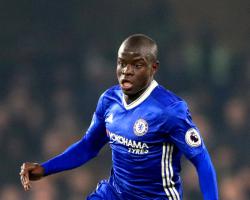 The 25-year-old has been in fine form for the table-topping Blues having joined them in the summer after starring in Leicester's shock Premier League title success last season.

Kante was heavily linked with a move to the Emirates Stadium after Wenger said 12 months ago that he had been aware of the player for several years.

But he instead ended up at London rivals Chelsea and has been an integral part of Antonio Conte's side - who sit nine points clear at the Premier League summit.

Ahead of their meeting at Stamford Bridge on Saturday lunchtime, Wenger conceded he had twice been thwarted in moves for the former Caen player.

When he (was) in France, when he (was) at Leicester," he said when asked if he had looked to sign Kante.

He then appeared to imply Kante had chosen Chelsea as his destination for financial reasons.

Asked what happened in a move for the player, Wenger added: "There again, I cannot explain everything but it is quite obvious when you look where he has gone.

Pushed on if it was a move driven by money, he added: "I do not want to talk about that, transfers are transfers - you cannot explain absolutely everything."

It is not the first time Wenger has spoken about Kante - having revealed last year ahead of a game against Leicester that he had been made aware of his talent some years before.

"Of course I know him," he said last February.

"You look at his career and you will be amazed

Because he played in Suresnes in Paris at the age of nine, 10 years old

After he went to Boulogne as an amateur

"After, he went to Caen, and then he came finally to England

But everywhere he has been, he has always adapted to the level where he was.

"One of my best friends in life knows him since he was 10 years old, and he spoke to me about him

We went to watch him and we saw he had quality

But I didn't know he would come so quickly to England."

Wenger could certainly do with a player like Kante for the short journey to face the title favourites.

He confirmed Aaron Ramsey faces three weeks on the sidelines after picking up a calf injury in the surprise 2-1 home defeat to Watford on Tuesday which leaves the Gunners adrift.

With Granit Xhaka serving a ban for his second red card of the season, Mohamed Elneny in the final of the African Cup of Nations with Egypt, Jack Wilshere on loan at Bournemouth and Santi Cazorla and now Ramsey both injured, Wenger's options are limited.

Francis Coquelin will surely start in his most natural role but there is no obvious partner for the Frenchman, with Alex Oxlade-Chamberlain having played in Ramsey's place after replacing him against Watford.

Wenger could opt to start with the England man - who faces a fitness test after taking a knock to the knee against the Hornets - or turn to youngster Ainsley Maitland-Niles, who impressed there in the recent 5-0 FA Cup win over Southampton but has never started a Premier League game.

"Yes, we are a bit short at the moment," Wenger conceded.

We have Jeff Reine-Adelaide, we have of course Maitland-Niles, we have Chamberlain

(Alex) Iwobi can play in there

Elneny will come back after Sunday, so I still have some strengths."

Despite dropping further behind Chelsea following the damaging defeat to Watford - Wenger does not believe defeat at Stamford Bridge, which would take the hosts 12 points clear of their opponents, will not rule his side out of the title race.

"I don't know, but in a press conference you always have to deal with the 'ifs'," he added.

We have shown in the first game that we can beat Chelsea so let's turn up with the same quality and show a straight response.

"What is at stake is how well we respond, in a united way and in a determined way, to get there and play our game."

As well as Oxlade-Chamberlain, Olivier Giroud also faces a fitness test ahead of the contest having been replaced at half-time in midweek.