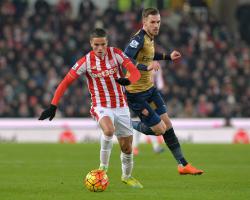 Wales international Ramsey was part of the Gunners side that drew 0-0 with the Potters at a venue where he broke his leg in 2010 during Arsenal's only ever Barclays Premier League win in Staffordshire.

On that day in February six years ago a challenge from Stoke skipper Ryan Shawcross left Ramsey out of action for 10 months and sparked a feud between Wenger and Stoke supporters which has dragged on to this day.

Wenger, who also thought Stoke were "very physical" in a game that featured no cards, believes those who were singing about Ramsey will feel a sense of shame after leaving the game.

"I don't listen too much

I focus on the game," the Frenchman said.

I don't know what to do about it, I have no influence on it

I don't know what generally you should do about it.

"When people get together sometimes they forget their individual responsibility

Maybe when you go home and watch it on television you are less proud."

No excuse for these disgusting chants