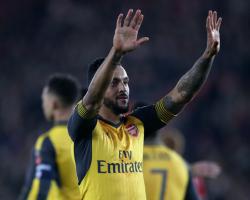 Welbeck fired his first goals since April as Arsenal thumped Southampton 5-0 in the FA Cup, with Theo Walcott also scoring a hat-trick at St Mary's.

Welbeck had only just beaten knee ligament trouble when he suffered cartilage problems in late April, but he flourished on the south coast on Saturday to banish his injury worries.

Gunners boss Wenger hailed the 26-year-old's resolve in fending off not one but two long-term knee blows to move back towards top form.

Asked if he had feared Welbeck may never recover full sharpness, Wenger said: "You do wonder: I wondered first of all would he be solid enough mentally to cope with that.

"Then secondly you hope he will go well after he comes back after the second surgery.

"He worked very hard, he went through some moments of very deep disappointment

Because when he had the setback and he had to go in again, as a professional player that's very difficult.

"But he became even more resilient and worked even harder.

"He's highly respected inside the club because he's shown so much dedication.

"It was good to see Welbeck be so convincing

I didn't expect him at that level, because I knew he worked very hard but I didn't know how much efficiency it would be in a competitive game.

"It was great to see he hasn't lost his runs or his finishing; it shows as well when you are able to transform that frustration in not playing into efficiency that he's a special guy.

"There are always two fears, the first is that it takes him too long with decision-making, and second that he would be scared for contact.

"But the runs and also fighting the defenders, it was important for me."

Welbeck opened the scoring with a dinked finish before latching onto Alex Oxlade-Chamberlain's lofted pass to slide home between Harry Lewis' legs.

Wenger hailed Walcott for staying calm to score his treble and kill off any chances whatsoever of a Saints fightback.

"Theo is a good finisher," said Wenger of Walcott, making his first appearance since December 18 due to a calf problem.

"And the chances we created were very good.

"He finishes one touch he's very quick, he has a short backlift and is very accurate in finishing."

Southampton crashed to earth after the midweek heroics of seeing off Liverpool to reach the EFL Cup final.

Saints' second-string were no match for Arsenal's reserves - but boss Claude Puel still made no apologies for making 10 changes to the starting line-up.

Puel insisted he will wait for the results of scans on Virgil Van Dijk's foot injury before deciding whether to sign a defender before the close of the transfer window.

"I decided to make changes, but if I had the moment again to make the selection I would do the same again," said Puel.

"It's a difficult moment for us with recovery.

"Before the game we had nine players not available for this game.

"And playing always with the same players, it's impossible for us.

"It's a good lesson for the future, and it was important to come back in the second-half with a good answer and good play, and it was better.

"But the balance between young players and experienced players was not enough.

"We have very important games against Swansea and West Ham coming up.

"For Virgil (Van Dijk) I'd hope that Monday or Tuesday we can have an answer on his injury.

"I maintain what I said, I prefer to wait for the results of Virgil's diagnostics (before making a final decision on a possible new recruit).

"And we'll decide what to do after this

We have to wait for the results."