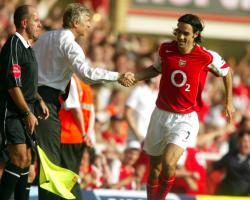 Gunners boss Wenger has yet to announce whether he will agree to a new two-year contract which is currently on the table, despite revealing last weekend that he has made up his mind about his future.

The 67-year-old continues to split opinion among the Arsenal fan-base, with a growing number of supporters calling for the Frenchman to leave when his current deal expires at the end of the season.

Protests have been held ahead of two recent home games, with the Gunners having lost six of their last nine matches and fighting to finish in the Premier League top four.

As well as Wenger's future being up in the air, it remains unclear whether either Sanchez or Ozil will sign new deals - with the pair having just 15 months left on their present agreements.

Wenger revealed earlier in the week that any talks with two of his key players have been put on hold until the summer as everyone keeps focus on addressing a slide in form, but Pires reckons it is the manager's own future which is the more pressing issue.

Asked by Sky Sports News about Sanchez and Ozil, the former Arsenal winger said: "I hope for him (Sanchez) and Ozil they extend with new contracts

The negotiation is very difficult and maybe complicated.

"But the most important is to see Arsene Wenger extend

Arsene Wenger is very, very important for Arsenal for now and for next season.

"I believe in Arsene Wenger

He was not perfect but he was good, we won some titles."

The 43-year-old Pires, who now works as a coach at Arsenal's London Colney training centre, conceded there are some issues in the team at present and questioned the spirit following the 3-1 defeat at West Brom last weekend.

"I'm still training with the team and can give advice to them," he said.

It has been very difficult for maybe two months.

"Unfortunately we lost against Bayern Munich in the Champions League, we lost some games in the Premier League, so there is some little bit of troubles with the team

It is not a problem for the players.

Lots of fans talk about Arsene Wenger but he is a manager of Arsenal, and I think until the end of the season the players and Arsene Wenger need to fight.

"It is very strange but sometimes we play good, sometimes it is not good because some players maybe need more spirit.

"The quality is there and when you see the names on the paper they are great players, like Ozil and Sanchez."