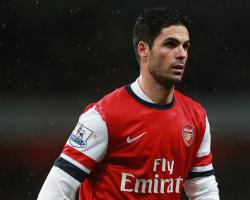 The Gunners returned to the top of the table, one point ahead of Manchester City, after a late double salvo secured a 2-0 victory over Cardiff at the Emirates Stadium on New Year's Day.

However, following next weekend's FA Cup third-round ties - when Arsenal host north-London rivals Tottenham - Arsene Wenger's side will not then be in action again until Monday January 13 when they travel to Aston Villa.

By then, Chelsea could have gone top with victory at Hull on the Saturday while City will lead the league once again if they win at Newcastle the following afternoon.

With such little margin for error, Spanish midfielder Arteta - who continues to skipper the side with club captain Thomas Vermaelen on the bench - wants Arsenal fully focused on delivering their own required performance each time they head out onto the pitch.

"We are just going from game to game, because there is still a lot to play for," Arteta said.

"You can see every week there are results which are surprising and that everyone is putting pressure on each other.

"It (title race) is going to go all the way to the end and we want to be there because we want to win the league."

Arsenal had to work hard for the win over a determined Cardiff side, who were watched by manager-in-waiting Ole Gunnar Solskjaer from the stands.

Eventually the pressure told as substitute Nicklas Bendtner crashed the ball home from close range with just two minutes left before Theo Walcott's neat chipped finish in stoppage time made sure of all three points.

Arsenal's victory, however, came at some cost with Bendtner having suffered an ankle injury in the process of scoring, when Cardiff goalkeeper David Marshall caught him trying to make a save at point-blank range.

Lead frontman Olivier Giroud is also troubled by his own ankle problem, but could return to face Spurs.

Bendtner is set for a scan on Friday, with initial fears he would be sidelined for several weeks.

Wenger, though, insists he will not be rushed into any hasty transfers, with fit-again German forward Lukas Podolski another attacking option, although he looked rusty when deployed in a central role against Cardiff.

Arsenal have been linked with a cut-price move for Fulham striker Dimitar Berbatov.

Walcott would always welcome some additional talent to boost what he believes is now a very "special" squad.

"To be fair that is for the manager to decide if he wants to go out and buy anyone," the England forward said.

"It is always nice to have competition with players coming in, but January is such a difficult period in the transfer market to get players in, especially the top players.

Walcott feels Arsenal are growing in confidence as they look to mount a long-overdue sustained assault on the Premier League crown.

"If you want to win titles then you have got to go to the end and the thing about this team at the moment is that we never give up," the England forward said.

"Every game that we win the belief gets stronger and stronger."

Bendtner, meanwhile, posted an update on Twitter thanking Arsenal fans for their messages of support.

The Denmark striker, now back in the first-team picture having seemed set to leave the club, said: "Have a scan tomorrow that will tell us more. So happy with the 3 points. Thanks for all your tweets and concerns. #fans #arsenalfamily #23"