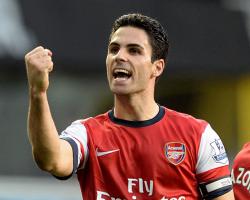 The 33-year-old Spaniard is set to miss Saturday's FA Cup semi-final against Reading at Wembley as he recovers from a minor ankle problem picked up on his return to action with the Under-21s following a calf injury which sidelined him since the end of November.

Manager Arsene Wenger is keen to retain the services of Arteta, who is out of contract in the summer and expected to agree a 12-month extension.

In Arteta's absence, the Gunners have moved up into the top two of the Barclays Premier League with a run of eight successive victories.

The former Rangers and Everton man is determined to first get himself fully match fit and then sort out the formalities of a new deal.

As long as I do that I am sure that I will continue with this club, with the relationship I have with the club and the respect I have from everybody here," said Arteta, who signed on transfer deadline day in August 2011.

"If I don't do that then I am not going to be here because I don't want to be somewhere where I cannot perform at my best and give what I think I can give.

"In May, when everything is fine, we will sit down and talk and it will take five minutes."

Arteta is set to step up his rehabilitation next week, and could be back in contention for the showdown against Chelsea on April 26.

I have done five or six sessions with the first team and I am feeling good," he said.

"I don't feel I am ready to start, but I'm almost there

It has been a long process, I don't want to rush it.

"I made a mistake at the end of the rehab (from my groin problem), but I think I will be back soon."

Arteta admits it has been tough watching from the sidelines.

"It is obviously very frustrating when you cannot perform, when you cannot be out there, training or any of the basics to contribute to the team on the pitch - it makes it really hard," he said.

"It is part of the job and we have all been there.

"This season we have probably had more injuries than ever, so sometimes you learn other things when you are out.

"It has been frustrating and I am trying my best to get back to the level I want to be at.

"Whenever it comes, I will take it."

"We are in a really strong position now compared to where we were in November.

"Three months ago, to be in the top four was an achievement and now it is not good enough.

"In the next two weeks we can determine where we are and what we can do from then on."