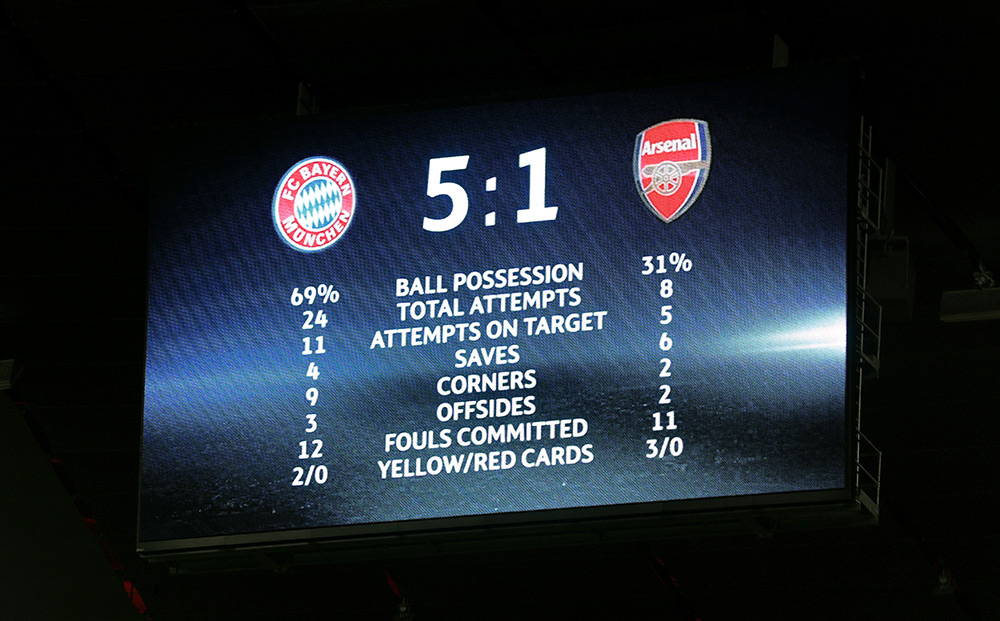 Can it get any worse than this? - The question has been asked before this season, and it remains to be seen.

Clearly we arrived in Munich as the underdogs. Many didn't expect us to get a result against the well organised Germans, but what we weren't expecting was the complete and utter surrender that we witnessed in the second half.

We're so fragile, that the loss of one player - Koscielny - completely upset the team and after looking like they could unexpectedly get something from the game they completely collapsed. Obviously having to bring on the hapless Gabriel didn't help, but nevertheless it was a spectacular thashing that bayern dished out.

It's an utter scandal that we're considered amongst Europe's 'elite' clubs on tonight's showing, but clearly the reputation is based purely on finance rather than playing ability - it's clear that for the size of the club we're hopelessly under-performing, and that's down to one man.

That man should go - simple as that.

Arsenal saw their Champions League hopes all-but extinguished by Bayern Munich as they were thrashed 5-1 at the Allianz Arena.

The Gunners have fallen at this stage in the last six years and now need to produce a miracle performance at the Emirates Stadium to overturn the heavy deficit and progress to the quarter-finals.

Arjen Robben had put Bayern ahead with a superb goal but Alexis Sanchez drew the visitors level with a well-taken finish after seeing a weak penalty saved.

Arsene Wenger, who side have lost five first legs in those six defeats at this hurdle, then saw his team rattle their hosts only to be blown away courtesy of a Robert Lewandowski header and a Thiago brace in 10 second-half minutes before a late strike from substitute Thomas Muller added the gloss.

Wenger had opted to field David Ospina rather than Petr Cech in goal, while Alex Oxlade-Chamberlain and Alex Iwobi were tasked with dropping back into a four-man midfield when Arsenal were defending.

Wenger's goalkeeping decision made no impact on the opening goal as Robben moved inside unchallenged before bending a superb effort past the desperate dive of Ospina.

Bayern dominated possession for much of the opening half as Arsenal remained boxed in defensively, although Sanchez won a free-kick on the edge of the penalty area after bursting forward at pace and being fouled by Mats Hummels.

Ozil hit a tame free-kick, which Manuel Neuer made hard work of, but the Germany goalkeeper was equal to Sanchez's penalty after referee Milorad Mazic pointed to the spot having adjudged that Lewandowski had fouled Laurent Koscielny.

Although he missed the resulting spot-kick, Sanchez recovered and after fluffing his lines again managed to tuck away the equaliser.

The Gunners were growing in confidence and, after Ozil and Sanchez combined, the latter slipped in Oxlade-Chamberlain whose cross dropped to Granit Xhaka, but his firm shot was straight at Neuer.

Lewandowski then passed up a glorious chance to make amends for conceding the penalty as the striker could only head a David Alaba cross over from in front of goal.

While the hosts remained a threat throughout the first half, Arsenal were also more involved as an attacking force and Ozil bought a smart stop out of Neuer on the stroke of half-time.

The game and the tie arguably hinged on an incident on 49 minutes when Koscielny over-stretched to make a clearance and was forced off, with Gabriel on in his place.

Less than 15 minutes later and Arsenal were three goals behind as Lewandowski nodded home Philipp Lahm's cross before flicking a pass into the path of Thiago, who slotted home coolly.

Arsenal were rocked and could have conceded again as Ospina rushed off his line to harry Lewandowski, who turned a shot against the bar before Robben's rebound was deflected behind.

The Colombian goalkeeper atoned for his error by making a superb point-blank save from the busy forward, but he was soon beaten again as Thiago's strike came off Xhaka and into the net.

Muller came off the bench to a great welcome from the home fans as Lewandowski made way, and despite having only four minutes to make an impact he did just that as he converted the fifth as Bayern beat Arsenal 5-1 for the second meeting in succession.

Sutton will feel that they've got a chance now.