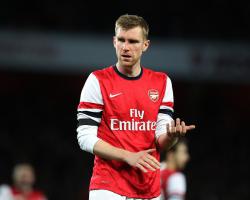 The European champions have suffered just two competitive defeats since losing 2-0 in the last 16 against Arsene Wenger's men last March, with Borussia Dortmund overcoming them in the German Supercup and Manchester City beating them at home in the group stages of this season's competition.

Arsenal's 2-0 victory in Munich came after a 3-1 first-leg defeat at the Emirates Stadium, and Germany international Mertesacker reckons the current Bayern are a better team than the one that triumphed last year in London.

"Bayern are untouchable at the moment, both in the Bundesliga and in Europe," he told Germany's Sport1.de

"The only thing that makes me positive is that we beat them in Munich last year.

We're going to give it our best."

Keeping things tight in the first leg will be Arsenal's key to progressing this time around, although that is easier said than done.

Bayern have scored 57 goals in their 21 Bundesliga matches this season and conceded only nine, to open up a 16-point cushion over Bayer Leverkusen at the top of the table.

"They're a little bit better in every department under Pep Guardiola," Mertesacker said

That was the decisive game."