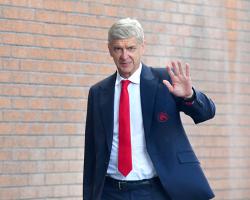 Wilson remains a staunch supporter of the Frenchman, under whom he served as goalkeeping coach until his retirement in 2003.

But the 75-year-old believes Wenger's refusal to reveal his future plans - despite claiming to have come to a decision - could prove harmful to the club's short-term prospects.

Wilson told BBC Radio 5 Live's Sportsweek programme: "I personally feel that we should know now - that Arsene should declare it.

"I think it would be good for the club, the players and the fans

I don't think the players know which way he is going to go at the moment and I feel that maybe they should know.

"It doesn't help that you've got this constant rumour that (Alexis) Sanchez is going to go to Chelsea or abroad, and (Mesut) Ozil wants to do this and Alex Oxlade-Chamberlain.

is thinking of moving on.

"I just think it would be very good for the club all the way round if we just had a little bit more clarity."

Wilson, who still serves as a club ambassador, believes Wenger has been unfairly pilloried for his side's apparent slide out of top-four contention this season.

And he insists the Gunners' current crop of star names lack the spirit and commitment shown by previous sides of his era and Wenger's famous 'Invincibles'.

Wilson added: "I won't have it that he (Wenger) is not able to motivate his players - what I'm concerned about is the personality and the character of the players he has with him.

"There are some terrific players (but) I look at my team of many years ago and I look at the Invincibles and I think there is certainly a leadership (issue)."

Wilson admitted he is upset by the sight of Arsenal fans arguing over Wenger's future - culminating in the farcical sight of two planes bearing contrasting messages circling The Hawthorns during their Premier League game at West Brom last month.

He added: "I think he (Wenger) wants to be there

What I don't want is Arsene Wenger to leave Arsenal FC under a cloud.

"I know he'll always be welcomed back after he retires but I'm really hurting to see Arsenal fans arguing amongst themselves right now."