​Arsenal's youngsters led the side to an impressive 2-1 victory over Bournemouth in the fourth round of the FA Cup, setting up a tie with Portsmouth on the week commencing 2 March.

18-year-old Bukayo Saka lashed the Gunners into an early lead as he found space on the left-hand side of the box, before sending a thunderous strike through the fingertips of Mark Travers and into the roof of the Cherries net.

A quick turn of pace saw Joe Willock go through one-on-one with the ​Bournemouth shot-stopper, but the angle proved too tight for the youngster, who poked his effort into Travers' midriff. There are two ways of looking at this for Howe.

On the one hand, Bournemouth's performance was disappointing, to say the least. Their first-half display was unacceptable, with the south coast outfit struggling to keep pace with Arsenal's intelligent off-the-ball movement. Bournemouth are not in a winning mindset right now, and it showed.

The Cherries backed off of Arsenal's attackers far too often, looked timid in possession, and generally lacked energy and purpose around the park. In other words, the comeback was never really on. Aside from a few glimpses of goal midway through the second period, Bournemouth didn't offer much of a threat to the visitors. It's therefore only natural that a defender should be their man of the match.

Jack Simpson ensured the left side of Howe's backline stayed resolute, whereas right-back Adam Smith was frequently exposed by the superb Saka.

If it weren't for the efforts of Simpson and Nathan Ake, the Cherries would have been totally overrun.

The last thing I think Eddie Howe would want is a morale sapping loss here. We're heading that way at that moment. #AFCB need a spark.

This second half is about as low key as it can get! 

Bournemouth don't need a cup run along with their relegation fight and are really playing like it.

Arsenal are playing like they know Bournemouth aren't fussed about winning. . .#BOUARS pic.twitter.com/ZwvUQJMvMA

Love the passion from the kid on the terraces for Bournemouth, if only the team matched it on the pitch, slow and laboured in every sense from Bournemouth, is time running out for Eddie Howe? #BOUARS

Arteta will have taken plenty of positives from Monday's win at Bournemouth, having seen a number of his up-and-coming players dazzle in the opening half.

Willock hasn't set the world alight in 2019/20, but he was Arsenal's orchestrator tonight, distributing well and incessantly driving at Cherries defenders. 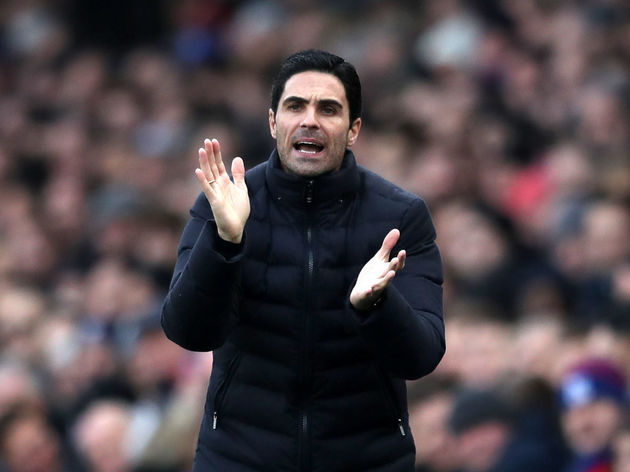 Nketiah likewise looked sharp, as did Gabriel Martinelli and Matteo Guendouzi. In fact, there wasn't a single young gun who failed to deliver for Arteta, with Saka undoubtedly the side's instrumental player.

Saka had a fine evening at the Vitality Stadium, the teenager hitting his third goal of the campaign after walloping a shot beyond Travers.

With displays like this, he'll soon have the left-back position on lockdown. The academy graduate has proved to Arteta he's got the attributes for the role, and there's every chance his coach will keep faith. ​​The form of Saka could also hand Granit Xhaka a lifeline at the Emirates Stadium. The flexibility of Arteta's system sees the latter cover when his teammate bombs forward, giving the teenager freedom to join attacks and utilise his offensive skill-set.

We called. He answered.

Bournemouth return to ​Premier League action as they entertain ​Aston Villa at the Vitality on Saturday, before making the journey to Yorkshire for a clash with ​Sheffield United.

Arsenal face a trip to Turf Moor on Sunday, with hosts ​Burnley in good shape, having won three of their last four top-flight fixtures. The Gunners follow that up with a home match versus ​Newcastle United, who haven't tasted defeat since new year's day.