Cazorla- Gunners deserve to be top 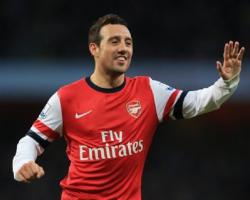 The Gunners maintained their slender one-point advantage over free-scoring City with a 2-0 win against Fulham at the Emirates Stadium on Saturday through two well-taken second-half goals from the Spain international.

Bookmakers and pundits alike continue to suggest it will only be a matter of time before Arsene Wenger's men are overtaken in the championship race, with Manuel Pellegrini's side on irresistible form having taken their goals tally to the season to 103 in their win over Cardiff.

Cazorla, though, sees no reason Arsenal should not be considered genuine contenders to last the distance as they continue to answer all questions of their character.

"At the moment, we are showing that we are up there with them," Cazorla said.

"Maybe at the start of the season nobody put us up as high as Manchester City or Chelsea, maybe because of the signings they made. But it is ultimately demonstrated on the pitch and, right now, Arsenal are above them and our objective is to keep fighting with them.

"(But yes) it is true, they are big favourites for the title as well."

Cazorla feels Arsenal have shown this season they are capable of producing results when needed.

"There were games last year where we would go 2-0 up and we would end up losing it or under pressure (and) for a title-winning team that cannot happen," he said.

"This season, the team is much more solid, we are much better at closing out games.

"We need to continue this form, because of Chelsea and Manchester City."

Cazorla added: "Every year the pressure has to be at the maximum. In the end, a team like Arsenal, that is striving for trophies, and has gone a fair few years without winning any, the aspirations we should have are to win as many trophies as possible and challenge the best teams.

"Right now, in the Premier League, we are top because, up until now, we have been the best team.

"In the Premier League it is about consistency, who has been the best throughout the season and, right now, we are at a very good level."

Gunners boss Wenger feels his side have grown in maturity over the past two seasons.

"We have improved on that front," he said.

"I believe the consistency of the results of the team since January 2013 has strengthened that maturity.

"The fact we are defensively more stable gives us a more serene attitude and that helps a lot."

Wenger, though, has played down suggestions a deal for Juventus striker Mirko Vucinic was imminent.

"We are open to strengthen our squad if it is possible," said Wenger.

"But I give you my phone number because if you find anyone over the weekend you can call me - we have not found anybody.

"As well we have (Nicklas) Bendtner back in the squad on Monday and (Yaya) Sanogo is back Monday week."

Arsenal's club-record signing Mesut Ozil again looked subdued against the Cottagers. Wenger, though, has no issue with the form of the German playmaker.

"Sometimes people expect him to make the difference alone," the Arsenal manager said.

"When it doesn't work sometimes, you expect him to take the ball and put it in the net.

"Ozil is more a passer than a finisher. I think as well the consistency of the quality of his passing slowly drains the opponent as he always passes the ball when you do not want him to do it, that slowly gets us to take over."

Wenger added: "Ozil is 25. he can only get better. The best years are coming for him now."