Former Arsenal star Cesc Fàbregas has opened up on why he left the Gunners in 2011, admitting that 's

The Spanish international was a key figure in the Arsenal side, captaining them from 2008 until he left for Spain in 2011. Fàbregas returned to Barcelona, where he had spent a large chunk of his youth career, but his exit from the Emirates Stadium came as a severe blow to the north London side. In an interview with ​Arseblog, Fàbregas addressed his

"I used to suffer, I used to spend sleepless nights suffering. And then you lose a game, you're in the bus like this, destroyed, and then you hear some players laughing, thinking about where they will be going out later."

Fàbregas admitted feeling 'lonely' at the club, and singled out Robin van Persie and Samir Nasri as the only two ​Arsenal players in the squad who were on a par with him 'mentally and technically'. "This was going on for a few years. We were playing beautiful football and I enjoyed that side of things but I was putting pressure on myself to lead, to do everything and at one point I felt kind of lonely.

"Especially in the last two or three years, I felt Robin and Samir were the only players - it's not an arrogant thing to say, it's how I felt at that time - were the players who were at my level mentally and technically."

It seems that the lack of effort made by the Arsenal board to improve the squad and the players' 'behaviours' were the final straw for the former ​Chelsea man, who moved to ​Barça and enjoyed three successful years with the Catalan giants. 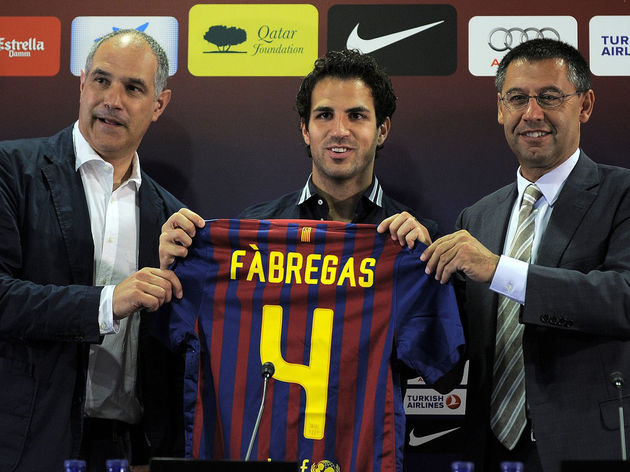 "Many things came in my head, I have to admit I was a bit empty, I was drained mentally, physically, in my soul knowing I'm giving everything, knowing a few signings the club could have made but didn't happen.

"Seeing some behaviours from certain players or something like this made me feel I wanted to check something else. If it was not because of that, I would not have left Arsenal at that time."