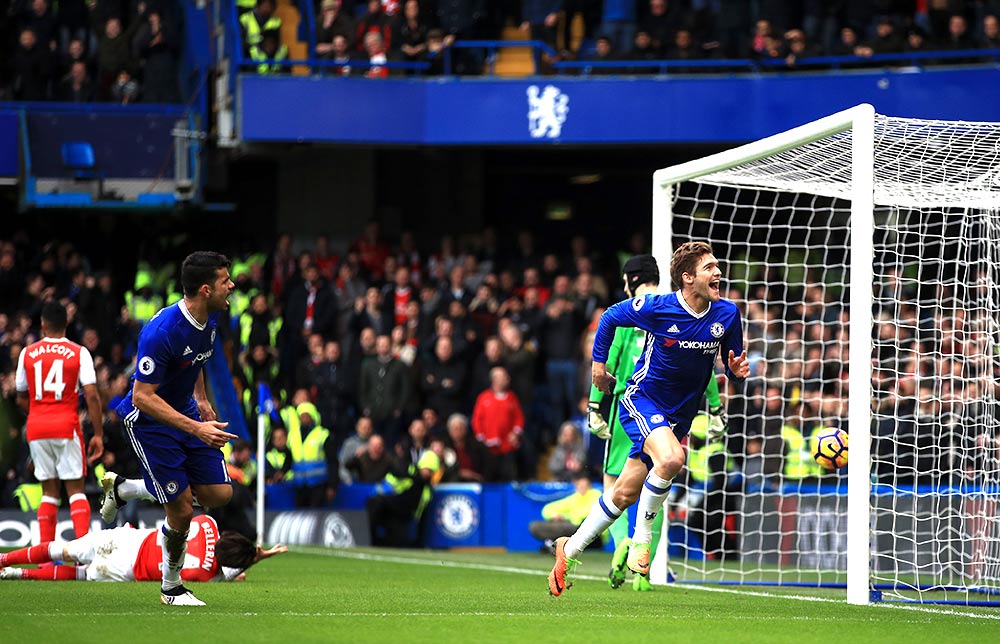 This was a predictably poor performance in a contest that Chelsea won at a canter.

As a fan, the essence of the problem is that you simply don't know which Arsenal will turn up for games these days. It was reasonable to predict another poor performance against Chelsea following the capitulation against Watford earlier in the week, but then again it was just possible that we'd travel across London and win... or was it?

Short answer is no.

We were shown up for what we are by Conte's team - Lacking in confidence, toughness and tactical nous.

We're destined to find ourselves in yet another battle for fourth place, and yet our board and management seem to think that's 'job done'.

It's hard to see how we can progress and reach a level where we're able to challenge for the title once again with the same management in place.

Time for Wenger to go?

Arsenal may have complaints about Marcos Alonso's opener, which came when he clattered Hector Bellerin

But the visitors could do nothing about the second in Chelsea's 3-1 win at Stamford Bridge.

Hazard picked the ball up in the centre circle, evaded Laurent Koscielny and brushed off Francis Coquelin before fooling Koscielny, again, and drilling in by Petr Cech.

Cech gifted the ball to Cesc Fabregas, who casually lobbed the goalkeeper, for a third, as Chelsea ruthlessly punished Arsenal, who gained scant consolation with a late Olivier Giroud header.

Home boss Antonio Conte celebrated as Chelsea won for the 11th straight home game to move 12 points clear of the Gunners with 14 games to play.

With Arsenal manager Arsene Wenger banished to the East Stand, serving the third match of his four-game touchline ban, Conte was unopposed in his technical area.

At times it seemed as if his team were similarly privileged on the pitch, too, as Chelsea supporters pleaded for Wenger to stay.

As N'Golo Kante, Pedro and Hazard excelled in an imposing team performance from Chelsea, Arsenal's Mesut Ozil and Theo Walcott again disappointed on the big stage.

The Blues have now won 16 of 18 Premier League games since.

Arsenal, more through lack of options than choice, switched to 4-3-3 at Stamford Bridge and initially the pressing of Alexis Sanchez, in particular, prompted errors.

Thibaut Courtois and David Luiz exchanged casual passes and the goalkeeper missed his intended target, allowing Alex Iwobi to nip in ahead of the defender

Gary Cahill headed a Pedro free-kick into the floor and over before Chelsea went in front.

Another Pedro cross was met by Diego Costa, whose header struck Cech's bar and looped up.

Bellerin had a standing jump, but Alonso beat him to the ball with a run and leap to score.

Those of a Chelsea persuasion argued it was a fair challenge as Bellerin toppled to the ground, banging his head

The Gunners argued it was a foul, with Alonso leading with his arms.

Costa shot into the side-netting and Chelsea's desire to build on their advantage was demonstrated when Alex Oxlade-Chamberlain was swamped by three opposition players in midfield.

Costa then fluffed a chance

The striker was caught by the recovering Coquelin, with Pedro free and screaming to his right.

Next Cech could only parry a Pedro shot from Alonso's cut-back.

Chelsea might have been two or three up, but Courtois was required to ensure the hosts were still ahead at the interval.

He tipped over a Gabriel header from Oxlade-Chamberlain's cross before Ozil's weak shot was held.

Hazard fired over before his mesmerising run finished with his 10th goal of the season.

Conte celebrated wildly, hugging supporters near the touchline as the bragging stepped up a notch with Arsenal facing a fifth successive Premier League loss at Stamford Bridge.

Their most recent win came in October 2011 and since then Arsenal have now scored twice in five games, conceding 15 times.

The lowest point was a 6-0 defeat in Wenger's 1,000th game in charge, but it felt like Groundhog Day.

Arsenal's defence finally caught up with Hazard 20 minutes after his goal when Gabriel caught him with a flailing arm, conceding a free-kick.

Courtois saved from substitute Danny Welbeck and Mustafi headed wide, unmarked at the near post.

Fabregas, on moments earlier, lobbed the ball in and declined to celebrate against the club he once captained.

Giroud nodded in a cross from Nacho Monreal in stoppage time, but it was already Chelsea's day.