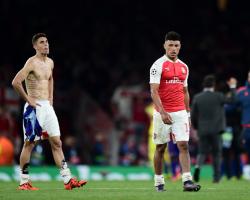 Both Arsenal and Chelsea lost their Champions League ties on Tuesday night meaning that, including the Europa League, English clubs have won just two of the eight continental fixtures they have been involved in so far

Arsenal have lost to both Dynamo Zagreb and Olympiacos while Chelsea could not build on their opening win over Maccabi Tel Aviv and were beaten in Porto.

Both Manchester City and Manchester United lost their respective opening group fixtures to Juventus and PSV Eindhoven with Tottenham enjoying Europa League victory over Qarabag while Liverpool were held in Bordeaux in the same competition.

Shearer, talking at the Sir Bobby Robson Celebrity Golf Day at Rockliffe Hall Hotel, reckons the amount of money now flowing through the Premier League has a part to play in the current debacle but feels the answer lies much deeper.

"The more money the Premier League gets it seems the worse the teams get in Europe," he said.

"Teams from Germany, Spain, Italy seem to be leaving our teams behind which is a great shame.

"We're not producing as many players as we used, which is blatantly obvious for everyone to see, and that's partly down to the number of foreign players in the game.

"Young players are not getting the opportunity, coaching standards is another thing but the list is endless and we could be here for another two or three hours discussing it and we probably won't get one definitive answer."

Arsenal's 3-2 home defeat at the hands of Olympiacos was particularly galling as the Greek side had lost all 12 of their previous European encounters on English soil.

Gunners boss Arsene Wenger was left fielding questions about his decision to rest first-choice goalkeeper Petr Cech in favour of David Ospina - who make an error that gifted Olympiacos their second goal.

Shearer was one of many ex-players to query Wenger's call on Twitter during Tuesday night's game.

"He did it in the first game and they got beat and Wenger said Cech was carrying a bit of an injury but he was still on the bench," added the Premier League's all-time record goalscorer

"So if he's fit enough to warm up and sit on the bench presumably he'd be fit enough if anything had happened to Ospina so it was a strange decision, particularly with the importance of the game, they got beat and the pressure is right on them now."