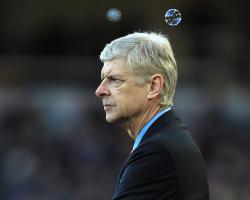 The Gunners recorded a third straight league victory to close up on the top four, and capitalise on Saturday's draw between leaders Chelsea and champions Manchester City.

Arsenal were without leading scorer Alexis Sanchez because of a hamstring problem, but showed they are far from a one-man team.

Yet despite the convincing way in which lacklustre Villa were despatched - with goals from Olivier Giroud, Mesut Ozil, Theo Walcott, a Santi Cazorla penalty and a stoppage-time effort from Hector Bellerin - Wenger knows there remains plenty of hard work ahead.

"It is too early to say [Arsenal can still make a challenge for the title]," the Frenchman said

I believe that we should try to be consistent and see what happens.

"We have maybe found a better consistency, that will be very important until the end.

"Let's show that we can win more and it shows you as well that when the confidence level is higher and when everybody's back defensively, it makes a difference."

Wenger added: "Our offensive game was good, even though I believe we had some weaker periods in the game when Aston Villa were in possession.

Overall it is a positive day for us."

The Germany playmaker has impressed since his return from a knee injury, also scoring last weekend in the FA Cup win at Brighton.

"Mesut still lacks a little bit of competitive edge on sharpness, but the quality of his game is exceptional and he's getting back now," Wenger said.

Arsenal signed centre-half Gabriel Paulista last week from Villarreal, and the Brazilian was among the unused substitutes.

Wenger is not expecting a hectic final 24 hours of the transfer window.

"We have done what we wanted and, unless there is a huge surprise and somebody calls me, then why not? (But) at the moment, nothing

Villa boss Paul Lambert, meanwhile, was left with plenty of thinking to do following another poor display, his side having last scored a Premier League goal against Manchester United on December 20 - more than 600 minutes of football ago.

He said: "You probably can't print the things I am thinking

We have been in this position for too long since I have been here.

"We do finishing and crossing in training every Friday, but when it comes onto the pitch you have to do it then.

"We are trying to get a goal and win a game, so we just have to keep working hard."

Lambert, whose side are just three points above the drop zone, added: "The keeper (David Ospina) made a good save from Andy's (Weimann) header and then we had Christian's (Benteke) chance, so those were big moments.

However, it is the score so we have to take it, but it is not good enough."