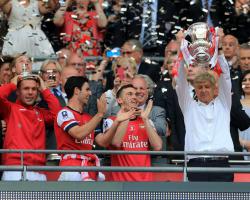 Both fixtures will be broadcast live, with Chelsea's match against Spurs to kick off of 5:15pm and shown on BBC One while BT Sport 1 will televise the game between the Gunners and City, which begins at 3pm on Sunday, April 23.

The Football Association confirmed the ticket allocations will remain the same as from 2016, with each of the four clubs given approximately 32,000 seats for their own supporters

Prices are frozen from 2014, with adult tickets costing from ÃÂ£30 to ÃÂ£60 while concessions will also be available via the individual clubs.

Chelsea fans are set to be in the West End of Wembley, with Spurs in the East End, a decision which was made following a coin toss.

For Sunday's match, given the majority of Arsenal fans are expected to use public transport to make their way to Wembley, the north London club have been allocated the East End which is hoped will allow quickest possible access for onward travel.